Whitney: Turning It All Around 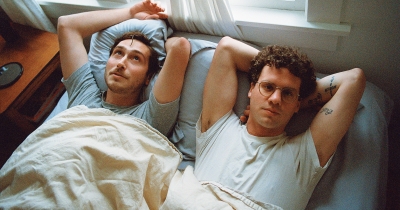 You scrub the last drops of lake from your skin, body buzzing from a long afternoon beachside and the 8 o’clock August rays disintegrate into puff. Drive away sharing laughs with friends, windows down and air melting on your arm. Whitney distill these halcyon days into sound.

Drummer/vocalist Julien Ehrlich and guitarist Max Kakacek, musicians with pasts in seminal indie groups (Unknown Mortal Orchestra and Smith Westerns), came together for their 2016 breakthrough, The Light Upon the Lake. The record was universally praised for its delicate rock that could veer into anthemic choruses, notably on tracks like “Golden Days” and “Polly.” Who knew sing-a-longs were the best medicine?

Their latest, Forever Turned Around, is a more melancholic balm. Lush melodies from backing strings and horns support Ehrlich’s falsetto singing songs about giving up, growing lonely, changing. Thematically, it feels like coming to terms with their successes and searching for stability in the ever-shifting nature of life. Introspection aside, it’s plainly beautiful music and Ehrlich and Kakacek have never sounded more in sync. To hear Ehrlich yearn to fade into the sunset is comforting in a way a lot of modern music isn’t. Maybe we shouldn’t fight change, but feel it.

Ahead of their show at Grand Rapids’ Fountain Street Church, Revue talked with Ehrlich about friendship, living in the Midwest, and staying optimistic during troubling times.

Forever Turned Around sounds more impressionistic, orchestral and moody. In the three years since your first album, how have your musical inclinations changed?

I think we wanted to look inward and take the sound that we found on the first record and explore it even further; playful, happy melodies with sad sounding lyrics. We’ve been listening to a lot of Neil Young. I feel like we’ll stray away from that on the third record.

The new record feels marked by this wistful reflection of your 20s disappearing. How do you reckon with growing up?

I think that’s pretty accurate. I don’t know how to reckon with it. I don’t feel like aging is something we get stressed out or anxious about. We just love to keep working and I think that’s mainly what this record conveys. After Light Upon the Lake, things could’ve spun in a million different ways, but just continuing to work was all we really cared about.

A lot of the album’s lyrical themes deal with personal turmoil and changing relationships. How has the anxiety of modern life and politics affected your writing process?

It definitely did when it came time to fully solidify the lyrical content. We wanted to reflect the mood of 2018 and 2017 when we were writing this, but both as straight white dudes we didn’t necessarily know if our explicit opinion on everything is what people needed. But it did end up affecting the mood, injecting our true anxieties into the music instead of calling out the man and the system.

Are you optimistic about the future?

Obviously with the bushfires in Australia, there’s a hell vibe going on right now. As far as Max and I personally and musically, I think we do feel more positive moving forward. Following up Light Upon the Lake was such a tough time. We were so deep inside our own brains, probably in an unhealthy way. Now even the voice memos we’ve been sending back and forth to each other have been really positive. We’re psyched to make another record.

Your friendship with Max seems like both the functional and emotional glue to this band. How would describe your chemistry?

It goes really deep. I think we’ve spent so much time together; every moment really for the past five years. So we’re just at the point where we can finish each other’s ideas. I don’t want to say it’s like telepathy but…

How does that friendship factor into the songwriting process?

I think more than ever, on Forever Turned Around, those roles got blurred. With Light Upon the Lake, it was usually Max coming up with a guitar-based musical idea and I’d come in with the melody and focus more on the words. I feel like we’ve crossed over, and tried to build a song from the ground up. Still, we very much work on every part of things together.

I know you grew up in Oregon so this is probably reaching, but the record has this Midwestern niceness to it. Has living in the Midwest affected your psyche?

Definitely. The only other place I’ve lived other than Oregon is Chicago. The winters traumatize you but honestly, there’s a sense of community in the Midwest that I don’t think is really rivaled or replicated anywhere else.

What can fans expect from the Forever Turned Around tour?

A bunch of dudes who are really grateful to be on stage and who enjoy playing their instruments. I’m sorry if that’s a boring answer, but it’s true.

Tweet
Published in On Tour
More in this category: « The Lumineers: Three Sides to Every Story Rosanne Cash: Memories and Moving On »
Login to post comments
back to top