Rosanne Cash: Memories and Moving On 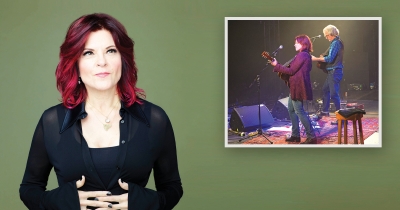 Since the release of her debut album 41 years ago, singer-songwriter Rosanne Cash has made a career of literate, sometimes aching songs. She has won four Grammy Awards, 11 of her songs have gone to number one on the country charts, and in 2015, she was inducted into the Nashville Songwriters Hall of Fame. The term “country music” may be misleading, or at least too small to contain her work, which is clear-eyed, wise and often sad.

Cash is currently on tour for her latest album, She Remembers Everything. We talked with the eldest daughter of Johnny Cash about her impressive career and upcoming show at St. Cecilia Music Center this month.

She Remembers Everything came out a year ago. Does it feel like it?

No, it really doesn’t. It’s hard to believe it was 13 months now.

You had an interesting live premiere for the album.

It was a product of what was going on in the community at the time. What we did was have women writers read pieces by other prominent women writers between the songs. We wanted to mirror what was going on in the songs in prose. Maybe it was rough-edged, but it went well. I loved doing that. Although afterward I got a note from a man who said, “I can’t believe you’d participate in all this man-bashing.” (Laughter). It was because it was all women reading.

Whereas if it had been all men, he wouldn’t have noticed.

You’ve been touring on this album for a while now. How have the songs changed, or have they?

What’s interesting is that the songs do change over time. That’s fascinating to me. They change in terms of musical dynamics, the nuances of the lyrics. “Seven Year Ache” I’ve been singing for 40 years. Sometimes it seems heartbreaking, sometimes it seems full of light-hearted humor. It depends on what I’m bringing to it at the time, I guess. The song “She Remembers Everything” has gathered power over time.

That title, “She Remembers Everything.” It seems both confrontational and maybe a little sad. Or am I just reading too much into it?

Oh, sure. I see it as both a warning and a seduction. But it’s also sad. It intimates that she’s left.

Well, yeah. Or that she died. (Laughter).

This album feels not just personal but also a bit more naked politically than you’d been in the past.

I did feel a lot more urgency. This time around, the election affected me profoundly. One of my daughters cried and said to me, “I feel like I don’t matter.” But she does. We matter. I don’t feel any point in holding back anymore, or trying to make myself palatable. It isn’t an overtly political album, but in a way all art is political. Even when Whitman wasn’t writing about the Civil War, he was being political.

Can you talk a bit about your influences?

Tom Waits. What he’s been able to accomplish. His freedom. Leonard Cohen. Always. Dylan, always. Lucinda (Williams), always. But I also think I appreciate really simple songs more than I used to, even the three-chord “Moon/June” stuff. The simplicity there. There’s something about people who can jettison everything that’s extraneous.

Your own lyrics have this quality of being both true and surprising. How do you do that?

I take that as a great compliment. I don’t know. There’s a mystery at the heart of songwriting. If you could explain it, it wouldn’t be songwriting. I’ve heard people say that they write to know who they are. There’s truth to that.

Speaking of songwriters, your father was a major one. What was it like to play music with Johnny Cash as a father?

It was a big shadow to step into. I had to keep steeling myself for the comparison, all these headlines saying, “Daughter of Johnny Cash …” I’m in the fucking Hall of Fame! (Laughter). The part that was great was that he gave me a template of a way to use imagination as a profession. Your creativity could sustain yourself. It didn’t have to be a hobby. That’s a tremendous gift.

Do you look back and think, “Wow, I’ve made it into some pretty rarefied air?”

Oh, God no. I hope not. That takes all the air out of everything. I don’t look back. I really don’t. I want to keep getting better. That’s the hope, anyway.

What can an audience member expect from your show?

I hate to say what you should expect to experience. But the audience gives something and gets something. There’s an exchange of energy. Some shows are different than others, but that’s always true: You get something and you give something.

Tweet
Published in On Tour
More in this category: « Whitney: Turning It All Around Of Montreal: Music for Misfits »
Login to post comments
back to top