Of Montreal: Music for Misfits 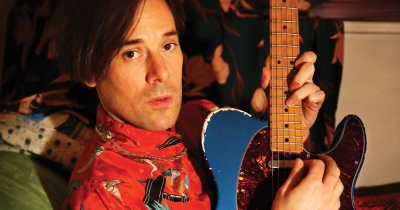 Of Montreal. Photo by Christina Schneider

Rules can’t be broken when they don’t exist in the first place.

At least, that’s how Kevin Barnes, frontman of the band Of Montreal, plays the game when it comes to being an artist.

“I don’t even think about rules,” Barnes said. “I feel like it’s way more fulfilling to experiment and try on different genres and blend them together. You’re supposed to be adventurous with your art.”

Known for their experimental pop and theatrical performances, Of Montreal is currently touring alongside their 16th studio album, “UR FUN” — yes, the quotes are part of it — released on January 17.

The synth-heavy songs in “UR FUN” represent an upbeat phase in Barnes’ life. “My personal life is really stable, and healthy, and wonderful. The album was a great pleasure to make. My mental health definitely affects my work a lot. If I’m in a darker frame of mind, then it’ll have a pretty pronounced impact on what kind of music I make.”

While the record boasts tunes made for a good time, the title “UR FUN” is suspiciously wrapped in quotes. Though one might think this foreshadows irony in joy, it was merely an aesthetic choice inspired by an ’80s movie poster Barnes saw.

“There’s this really weird, not great remake of the Garth film Breathless, starring Richard Gere. We saw a poster for it, and for some reason something clicked inside our heads,” he said. “We were like, ‘Oh that would make a really cool album cover actually.’”

For Of Montreal, aesthetics go beyond quotation marks and caps-lock: They play a major role in the band’s live performances.

“What we do is a combination of theatrics, music and visuals,” Barnes said. “There are lots of costumes, makeup, props, psychedelic visuals, and all sorts of things that I think hopefully set it apart from your everyday concert you might go see at a club.”

These costumes often include wigs, makeup and other elements of cross-dressing. Though the concept of gender identity has recently become a more mainstream conversation thanks to social media, Barnes has been pushing the status quo with his performances since Of Montreal began 24 years ago.

“Gender constructs are just laziness. It’s just people not really challenging themselves, just accepting the reality that is presented before them,” he said.

“If you just follow the narrative that’s created by CNN, Fox News and the major networks, you would have this perception of America as being very vanilla, very conservative and uptight. But then you realize, no this isn’t true.

“The conservative reality is a delusion.”

It’s a challenge to explore gender and sexuality no matter the context, but part of Barnes’ coming-of-age story as a musician was also realizing that he didn’t need artistic affirmation from his parents or the Catholic church his mother raised him in.

“I read this Frank Zappa book where he’s like, ‘The worst thing a musician can do is try to get respect and affirmation from their parents.’ You know, just don’t even expect it. Don’t even think that’s an option,” Barnes said.

“If that happens, then great, that’s awesome. But if it doesn’t happen, then don’t worry about it.”

This cavalier attitude has taken Barnes far. Since the ’90s, Of Montreal has been touring and releasing records that have encouraged their audience to be themselves.

“When we go on tour and play shows, it makes me really happy when people say that a song or a record helped them through a difficult time in their life. That means a lot to me because I also lean on music to do that, so it feels really great to know that I’m contributing something positive to a person’s life,” Barnes said.

Though Barnes doesn’t believe in rules when it comes to making music, if there were any, one could say that Of Montreal has broken them all. Between their immersive performances and unpredictable songs, they’ve made it clear they’re not your run-of-the-mill club band.

“We’ve taken a lot of chances musically. The albums are pretty different from each other, but there’s a musical, conceptual and spiritual thread that connects them all together,” Barnes said. “I feel very proud of all the love, energy and effort that went into the project, how many people we’ve met through it, and all the experiences we’ve had traveling the world.

“If it were to end tomorrow, I’d feel like it was a satisfying run.”

Tweet
Published in On Tour
More in this category: « Rosanne Cash: Memories and Moving On Dermot Kennedy: Without Shortcuts »
Login to post comments
back to top