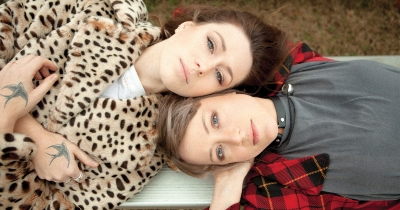 Back at the very beginning of 2020, before the pandemic took hold in the U.S., Larkin Poe lead vocalist/guitarist Rebecca Lovell nearly lost her voice, while frantically trying to finish her band’s latest studio album, Self Made Man.

“Looking back, it’s so hilarious to think of the manic phase we were in trying to get the record finished,” she told Revue during a phone interview alongside her sister, slide guitarist/vocalist Megan Lovell. “It was kind of a mysterious sickness where I was on vocal rest for two and a half, three weeks, and my voice was just gone. I’ve never experienced that, and it was incredibly stressful because we felt so much pressure to get the record done for what was intended to be an incredibly crammed year of touring.”

Instead, everyone went into lockdown, the band’s hectic schedule got completely canceled, and the duo had its first extended break from touring since the sisters first started playing music together when they were just teenagers back in 2005.

“I think taking that time at home, it did have healing properties,” Rebecca Lovell said. “It allowed me to take some time and establish some better habits, and allow that space to heal and connect with people on a different way. I think that was a real eye-opening experience for Megan and myself.”

Originally performing as a bluegrass trio The Lovell Sisters – alongside their older sister Jessica – Larkin Poe began in 2010, when Jessica left the group and Rebecca and Megan decided to pursue a grittier, more rock-oriented sound.

Born and raised in Georgia, but now based in Nashville, the group takes its name from their great-great-great grandfather, who was a distant cousin of legendary author Edgar Alan Poe.

Their first full-length album, Kin, came out in 2014, following a string of EP releases.

That same year, Larkin Poe played the famed Glastonbury festival in the U.K. for the first time, and worked with the legendary T. Bone Burnett. They went on to tour with rock ‘n’ roll icon Elvis Costello, who became something of a friend and mentor, frequently bringing the multi-instrumentalist sisters onstage to back him up on several different songs.

“We’ve been very fortunate to play with some truly amazing performers, and talk about a front row seat to watching the greats do it onstage,” Megan Lovell said. “Elvis Costello was our formative years artist, so to be able to watch him perform, and not only watch him perform and learn a lot, but just to feel the weight of the faith that he foisted on us, that was huge as a young person.”

Taking that strong vote of confidence and running with it, Larkin Poe released Peach in 2017, their first album on their own Trick-Woo Records label. They followed it up with 2018’s Venom & Faith, which topped the Billboard Blues albums chart, and earned their first Grammy nomination.

“It’s always nice to receive a stamp of approval from an organization like the Grammys,” Rebecca Lovell said. “But in our case, I think it felt particularly special because we are a very barebones team.”

Then, the band released the Self Made Man last June to near-universal acclaim for its fierce independent spirit, high-octane performances, and strong Southern roots. Despite the pandemic, the album became the most successful to date, topping the charts for rock, blues and folk.

Following that release, the band launched its own subscription-based livestreaming service, LPTV, as well as its own online fan club, Kinsiders. They also devoted more time to their popular YouTube covers series, where they put a bluesy, soulful, harmony-laden spin on songs new and old.

That led into their first-ever covers album, Kindred Spirits, released last fall, featuring stripped-down renditions of everyone from Elvis Presley to Post Malone.

Working at home in their own studio with Rebecca’s husband Tyler Bryant serving as engineer, the duo embraced the idea of creating a record during quarantine as a daily goal.

“I would say in today’s industry, it’s key for artists to bring as much in-house as possible, to maintain creative control,” Rebecca Lovell said. “To really know where your heart and your mind are as an artist I think is incredibly important, and to be able to have the skills and tools to pull it off. You can’t outsource vision to anybody, so in that respect, as sisters, in this together, it’s quite a gift to be able to lean on each other, and grow strong together through pretty much any circumstance.”

Having not had a chance to rip through the new songs live yet, Larkin Poe is excited to be back out on the road this fall, travelling the country for the first time ever on a tour bus, with a new lighting rig and stage production in tow.

“Both Megan and I grew up playing classical music as children, so we have been involved in symphonies and quartets, but we’ve never particularly imagined what it would be like to have our original music in an orchestral ensemble,” Rebecca Lovell said. “So it was such an unexpected and really beautiful experience getting to hear all those arrangements for the very first time. The performances were so immaculate, that we really felt strongly about releasing it on a grander scale, finding a way to share that moment with our fans. And as our first live record, I would say it’s pretty badass.”

Tweet
Published in On Tour
More in this category: « Dermot Kennedy: Without Shortcuts Home Is Where the Harmony Is »
Login to post comments
back to top