Home Is Where the Harmony Is 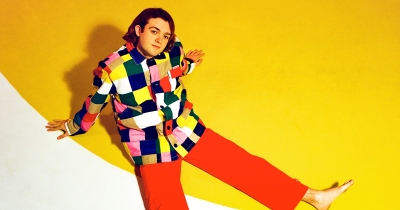 The pandemic brought the term back to stark reality over the past year and a half, while almost simultaneously TikTok reshaped the reach of Internet celebrity for a whole new generation.

So when Sloan Struble – better known by his music-making alias Dayglow – saw his song “Can I Call You Tonight” light up the internet, he couldn’t make sense of it.

“It’s crazy,” he told REVUE via phone from the back of his brand new tour bus. “Everybody takes first steps, and I guess for me the steps just happened really quickly.”

Born and raised in Aledo, Texas, Struble started playing around with Garageband when he was just 10 years old. Using the program, he learned to play guitar, bass, keyboards, and drums, all on his own.

In 2017, at 18 years old, he started recording as the sole member of Dayglow, writing, performing, recording, and mixing all the music himself at home on his computer.

By January 2018, he released “Can I Call You Tonight” as Dayglow’s third song ever, and everything changed.

In the time since its release, the hit has racked up well over 200 million plays on Spotify, sound-tracked countless clips on TikTok, and crossed over on alternative rock radio, nearly topping the charts and getting certified gold.

At the time, Struble was attending the University of Texas at Austin, but as things started taking off with Dayglow, even his parents encouraged him to drop out and focus entirely on music.

“My parents approached everything with caution, but they never stopped me from doing anything,” he said about growing up making music. “I was really resourceful. I never made them spend much money. I never got lessons. I just taught myself everything in my room, just keeping to myself. And now they’re coming to every show that they can… they’re like roadies now, so they’re all in for it.”

Struble released Dayglow’s debut album, Fuzzybrain, in the fall of 2018, and just a few days later performed at the massive Austin City Limits Music Festival. He had started to hit his stride on tour the year after when the pandemic hit and everything stopped.

“It was nice to have time to reflect on everything,” Struble said about coming off the road, and using lockdown to look back on his near-overnight success. “I think it would’ve felt a lot crazier if I didn’t have that time of reflection. But also I don’t have context for anything. I’ve never lived around the music industry, and I don’t have any people in my life who have been through it, so I’ve just been experiencing everything day by day, and taking it for what it is. But it’s all been amazing. I feel so blessed to even have any people come to the shows.”

Earlier this year Dayglow released the follow-up album, Harmony House, written well before the pandemic, and recorded while Struble found himself back home and alone.

“It really felt like nothing about my process really changed, because I’m used to just locking myself in my room and making music,” he said. “So it didn’t feel too different, but just seeing the cultural context, of how quickly people interact has changed… it’s been amazing to hear people say how the album has helped them process all that change.”

Struble approached Harmony House like writing a soundtrack for a sitcom that doesn’t exist. Hoping to tap into the sense of nostalgia that he feels many his age have for an era they never lived in, and pulling influence from artists like The Doobie Brothers and Steely Dan, he hoped to tap into a truly timeless quality of music.

“I love having a conceptual world that an album can live in, because I think people approach music that way nowadays,” he said. “We definitely love seeing artists have eras, and I like the idea of each one of my albums, at least the two I have so far, have their own little worlds.”

Musically he explored having melodic motifs run throughout the album, like recurring characters on a show, providing that comfortable sense of familiarity so many are looking for right now.

“Harmony House’s basic lyrical theme is just talking about change and growing up and how I’ve personally handled viral fame, and suddenly becoming an artist, and having that responsibility,” he said. “Sitcoms are supposed to be filmed in houses, and they’re supposed to be normal people that are relatable, and that’s just so ironic, and there’s so many layers to that, about culture, and about how people create these ideals. And I felt like that was happening to me a little bit. So it felt really therapeutic to write in that way.”

Eager to explore working on soundtracks for TV or film, given the opportunity, Struble has kept writing for Dayglow, and said he has most of the next album already written.

And although he admits that life on tour feels a bit like a simulation at this stage of his nearly completely sold-out run across the country, he added that he’s gladly embraced something of a persona of positivity and optimism as an artist working in this dark, socially-distanced era.

“I think there’s a time and place for everything, and I love every once in a while listening to mellow, sad music,” he said. “But I think something strange has happened, and there’s a lot of factors playing into it, but a lot of music is like really self-centered. Like there’s a thing going where, ‘This is main character vibes;’ where it’s like, ‘I am the center,’ and people put their headphones on, and it’s their own soundtrack. And I think it’s really interesting, and has created a new culture of how people process music. But what I try to do with my music is encourage people communally.

"When you listen to my music hopefully it inspires you to take your headphones off, and then say something to your neighbor that you’ve never met. That’s my goal.”

Tweet
Published in On Tour
More in this category: « Self-Made Success
Login to post comments
back to top