Rock is a Privilege, Not a Right 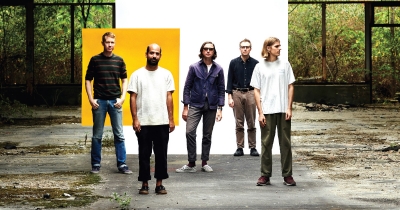 I grew up loving music and wondering what it was like to go on tour with a band,” Alex Bleeker, the bassist of indie rock band Real Estate, told Revue.

Flash forward a decade, and Bleeker’s youthful curiosity has turned into his daily reality.

“It is about to be 10 years since we released our second album, Days, which was a really big record for us. I just turned 35. This is the majority of what we would consider, I’m using air quotes here, ‘adult lives’. Touring and being in this band has been a large part of our identity and career just as human beings,” said Bleeker.

With five records already released and more on the way, the band Real Estate is undoubtedly an established staple in the indie scene. Not bending to the music business’ fast-paced, single-release driven market of today, the band’s authenticity for the “old school rock record” has won over a loyal fanbase.

“Marketing music has changed so much, and I don’t know if we really followed that trend, but there’s something about the Real Estate fan that maybe is indifferent to that, or doesn’t care as much, or wants that sort of cohesive old school rock record,” Bleeker said.

“We’re always going to want to make a cohesive album. That’s just the art form we do. We’re not thinking about songs as islands unto themselves, we are thinking about how they go together.”

Records and recordings only make up a sliver of how most musicians support themselves financially, however. Touring generates the majority of income, and the COVID-19 pandemic has forced bands like Real Estate into a string of crises — ranging from identity to money.

“Touring and being in this band has been a large part of our identity and career just as human beings. I think I’m forced to look in a mirror and ask if this thing that I’ve been a part of for so long, Real Estate, is just taken away from me, who am I outside of that, and what do I want to be? What do I want to do?"

Without shows, musicians like Bleeker are relying on recordings to sustain them, which is not easy. “Just the very fact that we’re talking about having an identity crisis because we couldn’t perform, it puts into stark relief this reality that the only real way musicians can support themselves is through playing live shows, because the recording industry is really stacked against you.”

For a record-driven band like Real Estate, that’s a hard truth for Bleeker to swallow.

“You get a little resentful that you have to tour to be a musician, because when something like touring is taken away from you, you do go, ‘Hey wait though, that’s not the entirety of what we do. We make music that people listen to.’ We’re musicians, and we can still do that,” Bleeker said.

“I’m not knocking touring, I’ve always loved touring, even the most out of all my bandmates. But I think it’s really important for fans to know that, whether it’s Real Estate or whether it’s their favorite DIY band, or whether it’s, to some degree, huge touring acts like Taylor Swift, everybody’s bread and butter is on the road.”

With this new, global reality to work in, Bleeker has become more focused on Real Estate’s fanbase. “I think there’s a part of getting older where there’s a certain ingrained, capitalist desire to get bigger and get bigger, — you should always be moving up in venue size, not down like some kind of failure.

Despite the difficulties today’s touring artists face while still entertaining their fans, Bleeker has chosen to transform the world’s uneasy impermanence into a feeling of freedom.

“Nothing is permanent, and nothing is guaranteed,” Bleeker said. “It sounds like a downer, but it’s really not if you look at it through the right lens. That’s a very liberating thought to me because you can keep moving.”

As Bleeker moves forward in life, his commitment to music and Real Estate remains unwavered. “I want to be doing Real Estate as long as I’m alive and as long as people care to listen to us. I would happily be doing this at age 65 if people still want to come see the show.”

With a successful track record like Real Estate’s, playing shows at age 65 is not out of the question for Bleeker and his bandmates. From his adolescent dream of being on the road, to his lifelong career as a musician, every day remains an unopened gift — a reality Bleeker eagerly unwraps.

“Having been in a band professionally for more than a decade at this point is beyond anything I ever dreamed of, and I just feel so grateful, and lucky, and happy to have had this experience,” said Bleeker.

“The reality is that it’s a privilege, not a right, to be in a rock band.”

Tweet
Published in On Tour
More in this category: « Home Is Where the Harmony Is Lindsey Stirling: Following Her Own Christmas Star »
Login to post comments
back to top