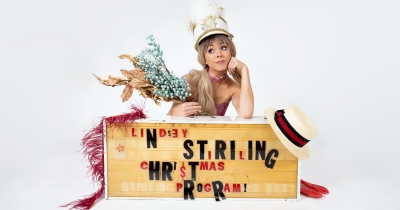 Whether it’s spreading Christmas cheer or finding her own muse, Lindsey Stirling knows something about following joy.

Best known for her massive success on YouTube, as well as her time on hit shows America’s Got Talent and Dancing With The Stars, Stirling has truly made a name for herself by embracing challenges at every turn with devotion, dedication, and delight.

Having already done the impossible by fusing the polar opposite worlds of classical music and dubstep, with her own personal flair for high-performance theatrics and heartfelt cinematics, she has amassed an enormous following of millions on social media. A one-of-a-kind artist, her work transcends typical definitions and defies expectations, taking her violin to the top of the charts.

“I’ve always loved touring in general, but there’s something so special about the Christmas tour,” Stirling told Revue about her Christmas Program tour (coming to Van Andel Arena on Dec. 2). “It’s just a little more soft and squishy in all the right ways. I don’t know how to describe it. I get the breadth to be a little bit silly and jovial, and also it gives me the extension to be a little bit emotional, because Christmas has so many deep emotions for so many people. You will laugh and you will giggle and you’ll be smiling, and then all of a sudden you’ll be like ‘Oh my God I think I’m getting misty-eyed!’ I love bringing out those emotions in myself and others.”

When everything came to a stop last year in response to the COVID-19 pandemic, Stirling stood strong, and found a new way to keep connecting with her fans by making her first-ever virtual livestream Christmas special.

“Last year was so tough with people being trapped at home and so many people not being able to be with their families,” Stirling said. “So that’s why I decided to do that virtual show, to just bring some smiles to fans in their homes. And after having that experience it’s made my whole entire crew all the more excited to now be able to actually go out and do what we do.”

Challenging herself like she always has, Stirling wanted to make the virtual show extra special by including a performance of her hit song “Crystallize” – while hanging from her hair.

She had witnessed the gravity-defying act performed during a Cirque du Soleil show, and wanted to learn, so during lockdown she practiced day after day to master the excruciating, yet exquisite technique. “Originally my goal with hair hanging was ‘I want to do this on tour.’ But then after my first day, my goal was, ‘I’m going to show up tomorrow,’ because it was so difficult and terrifying.”

She persevered and succeeded, performing the song suspended in air like magic during her Christmas special. But afterwards she knew it was time to stop.

“There’s a part of me that’s like, ‘But I was so pretty! I should pick it up again!’” Stirling said. “But I just have to remember my own mental health and just how much that negatively affected my mood and my agitation and my anxiety.”

A long-time advocate for opening up the conversation surrounding mental health, including discussing her own personal struggles, Stirling wants to continue to normalize the subject, and asking for help, especially coming out of the pandemic.

“I think the hardest part of the pandemic for me is when I returned back to L.A. and thought the world was opening up, and then it was another like eight months before it did,” Stirling said.

She had spent the first four months of lockdown at her sister’s farm home in Missouri, gratefully bonding with family, after having gotten whisked back to the U.S. shortly before her 2020 South American tour was originally set to start.

But upon returning back to the limbo of her life in L.A. midway through last year, she admits she had to work hard to maintain her mental health as it became months before she could set foot back onstage, and do what she loves.

“I think I realized during the pandemic, I deal with a lot of anxiety,” Stirling said. “And getting back onstage again, and having not experienced that adrenaline rush in so long… You can practice the violin, you can practice all the routines, but you cannot practice that feeling of being onstage, and the rush of adrenaline, and the chemical changes that are happening in your body.”

This past summer Stirling took her long-delayed Artemis tour out on the road in support of her 2019 album of the same name. It was one of the first major tours to return to large venues, and found her diving deeply into many personal songs, including the single, “Lose You Now,” which tackles the grief she continues to feel after having lost both her father and a close friend to cancer.

“My whole Brave Enough album (2016), that I wrote pretty much right after my friend died, and then my dad passed away during the writing of that album,” she said. “I was so stricken with grief, and so heavy with it, it’s like I was processing it as I was writing, and ‘Lose You Now’ is the song I was trying to write, in all the songs on that album. It’s heavy, but also it’s more about the hopeful side of it, because that’s where I’m at now, with my grief, even though it still hurts and I still miss them, it’s like I have such an understanding that I am so grateful that I had them in my life, and that feeling outweighs the pain most of the time. The gratitude that I had them. And also the belief that they’re my angels, and they’re with me all the time.”

Stirling plans to pull out all the stops with the Christmas Program tour, which is her fourth holiday run, performing festive favorites, as well as songs off her 2017 chart-topping Christmas album Warmer In The Winter. Backed by her troupe of dancers and a treasure trove of sparkling costumes, the show promises to be an escape into the wonder and joy of the season.

“It’s actually quite a bit different,” Stirling said about the Christmas Program. “Coming out of rehearsal, I’ve got really crazy callouses forming on my hands because I am learning some trapeze stuff. I was really inspired by my hair hanging experience, but also realizing that I did not want to continue that… I was thinking, what else can I do? Because that was such an empowering experience, and it was so beautiful. So two of my dancers and I are going in and doing aerial practices several times a week. I’m developing some upper body strength I’ve never had in my life. I’m working out really hard to be able to do this, and really excited for it.”

Tweet
Published in On Tour
More in this category: « Rock is a Privilege, Not a Right Circa Survive: Music Enduring Through Time »
Login to post comments
back to top