Circa Survive: Music Enduring Through Time 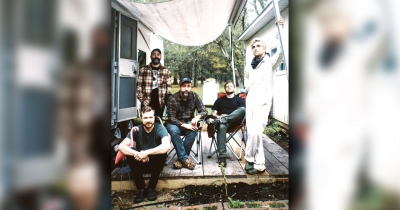 If there’s one thing we’ve all learned during these last two years, it’s that time is an illusion. Ebbing and flowing at a wildly different pace during the pause and panic of the pandemic, the past two years simultaneously felt like an eternity and an eye-blink.

For Philadelphia progressive post-hardcore band Circa Survive that passage of time was even more surreal.

Flashback to late summer 2019, the band had just come off the road, and planned to spend some time at home before hitting the road again in 2020 to celebrate the ten-year anniversary of their third full-length album, 2010’s Blue Sky Noise. Little did they know that COVID-19 and subsequent lockdowns were lurking around the corner, ready to upend everything.

“It’s interesting, we’ve been together now for 17 years, so oddly enough, going through a global pandemic together and surviving it as a full-time band is just another thing we’ve done together now,” guitarist/backing vocalist Colin Frangicetto told Revue about Circa Survive’s longevity. “We’ve done so many things together, and at a certain point, we’re going to hit a spot where it’s like, ‘Oh, we’ve spent half our lives together.’”

Now 40, Frangicetto first formed Circa Survive with former Saosin lead vocalist Anthony Green back in 2004. Soon after, they joined forces with guitarist Brendan Ekstrom, bassist Nick Beard, and drummer Steve Clifford, and released their debut album Juturna in 2005. The band hit the road hard, leading up to the release of their second album, On Letting Go.

Long before the isolation of social distancing compelled many of us to seek soothing solace in shared nostalgia, Circa Survive had revisited each of its first two records at their respective 10-year marks, staging successful tours that allowed longtime fans a chance to relive their youth, and younger fans a chance to fully experience those older records.

“For us, it’s totally a blast to just really step in and play a record from start to finish, and perform it the way we thought it should be digested, because otherwise, you don’t get a chance to do that very much,” Frangicetto said. “You’re always mixing up the sets. So it feels really special, and it feels like now is the time to really celebrate this music.”

Preparing to revisit Blue Sky Noise forced the band to reexamine a challenging time in its history. Released by Atlantic Records, it was the only major label release in Circa Survive’s entire catalog, and took time for their fan base to fully embrace as one of their absolute best.

“It just feels like I’ve been living inside of this record for two years now,” Frangicetto said. “Not to say that’s made it any less special or anything, it’s just been a really interesting headspace to reside in. It was a major transitional period for the band. Being on a major label is a weird thing, especially when you’re a weird band. I think it was overwhelmingly a positive experience for us. Making that record really shaped us creatively as far as our decision making and our ability to hold steadfast to ideals and our ideas. It feels like a really special thing to celebrate.”

After Blue Sky Noise, Circa Survive self-released three more full-lengths, leading up their new EP, A Dream About Love, released last fall after having launched a Patreon page back during the height of the pandemic.

A Dream About Love marks yet another departure for Circa Survive sonically, as they explore more electronic synth-based sounds, yet it has origins going back to the Safe Camp Sessions the band did during the Blue Sky Noise era, when Frangicetto and Ekstrom mixed chilled-out electro versions of their songs.

“It felt serendipitous in a lot of ways because a bulk of these songs were completed prior to the pandemic,” Frangicetto said. “But over the pandemic, we were passing things back and forth, and kind of finishing stuff up. So as soon as it happened, and I realized we were sitting on this group of songs, I was like, ‘People are going to totally think that this is a pandemic record.’ It feels like a pandemic record, and then the marked sonic difference feels almost situational to some degree, even though it was totally by choice.

“We were making all the plans to release this long before the vaccine had really made its way, so we really had no idea when we would ever get to play this stuff for anybody,” Frangicetto added. “It felt like for the most part the plan was to put out a record, kind of put it into the void, and go, ‘Even though we can’t play these live, we just made an album, here you go.’ It’s kind of interesting, along the whole way we keep planning months out, and then the world just keeps changing as it’s happening. I feel like that’s happened throughout the course of the band. Like, when the band first started, people were actually still buying CDs, and file sharing was a new thing. But the rate of change now is so wild, you make plans for two months from now, and then all of a sudden something like the vaccine can completely change our existence and what is going on.

“And honestly, to circle back to where we started, I can barely commit to the idea that we’re going out on tour. Things change so fast that I don’t know what’s going to happen, but it looks like it’s going to happen!”

Editor's Note: Circa Survive's Blue Sky Noise tour has been delayed due to the recent Omicron surge.

Tweet
Published in On Tour
More in this category: « Lindsey Stirling: Following Her Own Christmas Star
Login to post comments
back to top