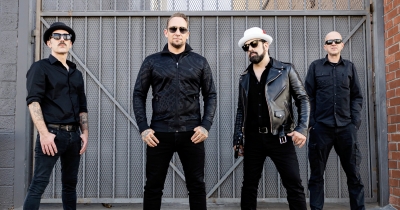 In early 2020, just before the pandemic put the entire world in its inescapable grip, hard-rock band Volbeat had planned to go on a global tour.

Like many other bands, they heard the initial warnings about COVID-19, but didn’t think it would grind their plans to a halt, and keep them stuck in their native Denmark for nearly the next two years.

The group took the welcome break and rested at home for the first two weeks, when vocalist/guitarist Michael Poulsen decided, since they had time, why not write a new album?

“Before we knew it, we had like 12-13 songs ready to go,” Volbeat co-founder/drummer Jon Larsen told REVUE about what has since become their latest album, Servant of the Mind, released in December.

The band led off the album with the singles “Wait A Minute My Girl,” and “Shotgun Blues,” showcasing their signature mix of psychobilly energy with heavy metal guitars, while adding even more new sounds.

Both songs went straight to Number One on Billboard’s Mainstream Rock Chart, racking up Volbeat’s total No. 1 singles on the chart to 10 in their career, more than any other band from outside of North America.

“It’s mind-blowing,” Larsen said of Volbeat’s radio success here in the U.S. “I don’t get it. We’re just three stupid kids from the countryside in Denmark, how did we end up here?”

Volbeat formed in 2001, after the end of Poulsen’s death metal band Dominus, and he decided to do something different. Teaming up with Larsen who had stepped away from music after playing in multiple other bands before, the group gained attention in Denmark with its debut, The Strength/The Sound/The Songs, earning accolades across Europe, even if, as Larsen says, it’s not very well known in the U.S.

The band’s breakthrough here happened later, when Metallica handpicked Volbeat to open their Death Magnetic Tour – which included a stop at Van Andel Arena back in 2009 – and began a bond between the two bands that lasts to this day.

Ironically, Volbeat was a little reluctant to sign on for last year’s widely covered charity album, The Metallica Blacklist, done in honor of the 30th Anniversary of Metallica’s iconic 1991 self-titled “Black” album.

“We were almost done with our album, and then we got a call from our management and they said, ‘Oh yeah, Metallica is doing this Blacklist thing, and they thought that maybe we wanted to participate in it,’” Larsen said. “And us, being as funny as we can be, our first reaction was, ‘Who?’ And nobody laughed. So it was like, ‘OK, that’s a bad joke.’ And then our next reaction was, actually like we don’t really know if we want to do this.

“Because first of all, the Black Album is such an iconic album. Everybody in the whole wide world knows the Black Album… Our only objection, so to speak, was that if we’re going to do this, we’ll definitely do not want to play ‘Enter Sandman,’ ‘Sad But True,’ ‘Nothing Else Matters…’ The big songs on the album. And they were like, ‘No, no, no, that’s not the idea.’

So Volbeat tried their hand at “Don’t Tread on Me,” and satisfied with their take on the song, submitted it for the compilation, and have even been including the cover in their live sets as they’ve returned the road this year, alongside six or seven songs off their new album.

When asked what he thought of the Black Album when he first heard it as a fan all those years ago, Larsen gave a surprising response.

“I hated it,” he said. “I couldn’t stand that album. I was like what is this? This is not Metallica! Where are the fast songs? Where is all the anger? I didn’t get it… But I bought the album, and I listened to it a lot of times, and I still really couldn’t get into it, and then I went and saw them live on the original Black Album tour, and when I saw them, then I was like, ‘Oh, now I get it!’ It’s a great live album. The songs work really, really well live… This is a really heavy rock album. It’s not a thrash metal album, it’s a heavy rock thing. It’s still not my favorite Metallica album, but if somebody puts it on, I’ll listen to it.”

Volbeat has crossed a milestone anniversary of their own, hitting their 20th anniversary as a band last year while in lockdown.

“It’s the longest job I’ve ever had,” Larsen said. “It’s kind of weird because it doesn’t really feel like 20 years… We hadn’t really thought about it for a long, long time, and it was only because of friends and family, and people around us who were like, ‘You guys have been together for like 20 years!’ Everyone was like ‘You’ve got to do something special for your 20th anniversary,’ and we said as soon as we can go back out on tour we’ll do something, and then again, no touring in ’21, so it was kind of like forget about it. Maybe if we’re still around for our 25th year anniversary, who knows?”

Tweet
Published in On Tour
More in this category: « Circa Survive: Music Enduring Through Time Caamp: Chill Vibes, Warm Hearts »
Login to post comments
back to top