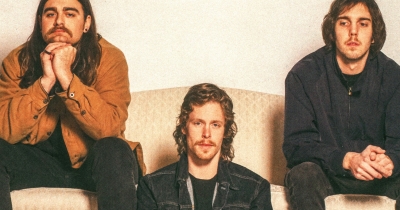 At its core, there is a certain sense of friendship and intimacy in the songwriting of Caamp, even as the band has blown up online and across the country.

Since the 2016 self-release of the band’s self-titled debut album, Caamp has hit the ground running, becoming an overnight sensation, years in the making, with the sudden viral success of their song “Vagabond.” The track quickly racked up tens of millions of streams, and helped launch the band from playing open mics in their native Ohio to massive festival stages and sold-out clubs.

“I like to think of our first Caamp album as like a folk powerpop album,” Caamp banjoist/guitarist/percussionist/vocalist Evan Westfall told Revue. “Because the songs are all short, and they get to the point, and they are catchy folk pop songs.”

Westfall has always gravitated more toward melodies, those little earworms, as he calls them that you can’t get out of your head. And that, more than any traditional background or anything else, is what drew him to playing the banjo.

“We just wanted to stand out, and I thought banjo would work with some of the songs,” Westfall said. “(Caamp lead vocalist/guitarist Taylor Meier) had written two songs, which were ‘Vagabond’ and ‘Ohio,’ so I learned the chords to those songs. I only knew like four chords for the longest time on banjo, and I just kind of made it work with the four chords I knew.”

Childhood friends who lived in different towns and bonded over summer camp, Westfall and Meier shared a love of music, and stayed in touch as Meier went off to Athens, Ohio, to college, while Westfall focused on music and took some classes in Columbus. The two continued to collaborate, eventually recording in an attic together in hopes of making their band happen.

“When Tay and I were first starting out, we were just so comfortable around each other,” Westfall said. “It’s a vulnerable thing, showing like your first-ever songs to somebody. Some people might be afraid of that criticism or whatever. And we just never were. We shared everything with each other, and we just understood each other from an early age.

“We were naïve, but we were weirdly mature,” he added. “We didn’t know what we were doing, or getting ourselves into back in the day. It was just weird being so calm and not freaking out… Like we weren’t afraid of failing, I guess. We didn’t care, we just kind of rolled into certain situations and just did it because we both loved it and believed in each other. We had an idea that we were onto something cool, and we didn’t know how quickly it would take off, or if people would connect with it. But it helped being best friends. None of that mattered, like success or anything, I just was making music with my best friend.”

Crafting his own distinct style, while also jumping onto guitar and percussion during the band’s live shows, Westfall remembers him and Meier bonding over Tom Petty’s final solo album, 2006’s Highway Companion.

His first concert growing up was actually a Tom Petty show with his parents, and the experience changed him. So it meant the world when last year Caamp released their own cover of Petty’s song “Square One.”

The song was a standalone release following the success of Caamp’s second album, By & By, back in 2019, which saw the band’s expand its sound with the addition of bassist Matt Vinson, and more recently keyboardist Joseph Kavalec.

The album landed the band’s first No. 1 radio single on the Adult Alternative Airplay chart with the more electric “Peach Fuzz,” while the title track has become something of a crowd favorite.

“Every time we play ‘By & By,’ it’s just a surreal moment onstage,” Westfall said. “I love to listen to the crowd when we get to that song in the set. Something happens when we play that song. I can’t pinpoint what it is exactly, but something happens… That song has taken on a life of its own, and everyone has their own interpretation of it, which is really sweet, and the point of the music.”

During a short tour last summer, Westfall said he heard even more people singing along than ever before, even if they were sometimes singing through masks.

“We had predicted that people would be hungry and want to come out to shows, and they were,” Westfall said of getting back out on the road following lockdown in 2020. “And they were some of the rowdier crowds we’ve ever had. People were just ready for it. We didn’t take a single second for granted up there, after that year we had.”

Keeping with the spirit of their house show, open mic early days, Caamp never uses a set list, and instead gets a feel for the crowd each night, and plays to the vibe. This time around, don’t be surprised to hear a new song or two, as the band has finished a new album, which they hope to release later this year.

“We don’t have a release date yet, but we’re hoping sometime this summer,” Westfall said of the new album. “We’ll start pumping out some of the songs hopefully this spring. And we’ll get back out on tour again, and keep doing that, and then record again and tour again, until we physically aren’t able to anymore, which is a good thing.”

Tweet
Published in On Tour
More in this category: « Volbeat Marches On Beach House: A New Chapter »
Login to post comments
back to top