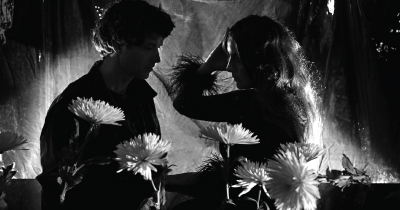 From the intertwined imaginations of Victoria Legrand and Alex Scally comes Beach House, an indie alternative band based in Baltimore. Elements of playfulness, whimsicality and shoegaze texture Beach House’s repertoire that stretches over an impressive 16 years.

Beach House’s ninth full-length album, Once Twice Melody, is being slowly released in chapters that are designed to mimic the sides of a traditional LP. The fourth and final chapter of the record will be available on February 18, just two days before their live performance at GLC Live at 20 Monroe in downtown Grand Rapids.

“As we were working on this group of songs, it felt like such a journey. It had so many tangents, and little characters and things. It started to feel like a much more nuanced story than just the regular album we would make,” Scally said.

With 18 songs total, Once Twice Melody has a tracklist longer than some musicians’ entire discography.

“This body of work really is the most we’ve ever put out in one album, so it just kept asking for more creative thought,” Legrand said.

“The chapters are these little gateways into the sides of the record.”

The album’s innovative release pattern and size allow listeners to experience Beach House in a way they might have not before–even for fans that have been following the band since their 2006 origins.

“We build something so that other people can go into this world. Every time they listen, they might have a completely different emotion, or reaction, or realization,” Legrand said.

“In the end we want people to feel whatever they want to feel with it and get lost inside of the work.”

Once Twice Melody’s layered landscape of organic and electronic instrumentation shapes songs that wander into one another with minimal disruption. Journeying through any Beach House album feels like summiting a mountain—an experience so ethereal it can only be compared to touching clouds.

“On every single song we’ve ever made, there’s a point where we decide we’ve kind of gone as far as we can go,” Legrand said.

“Nothing is really truly ever finished perfectly. You just are ready to let it go.”

Part of the full Beach House experience undoubtedly includes their concerts. But before Scally and Legrand can hit the road, they have to arrange their albums to be performed live—a technical process that takes time, patience and experimentation.

“We use a ton of organs and keyboards on our records, and probably one of the craziest, most time-sucking things is that we have to basically sample all of those keyboards onto our live keyboard, and then arrange them in ways that will make the song sound like the song,” Scally said.

“Sometimes a single patch in Victoria’s live keyboard is four different sounds doing things. It’s kind of this laborious, trial and error thing of figuring out the exact way to translate the album.”

What may be difficult behind-the-scenes appears effortless sur scène and is part of what makes each Beach House performance appear otherworldly. However, beyond the show’s sound and lights lies human connection, which is something Beach House takes time to spotlight at each show.

“We’re just really, really hoping and trying to reactivate a state of joy, music therapy, healing, love therapy, and all those cool things that come from social contact and being in a show,” said Scally.

“We want it ourselves, we want to create it, and we want to be a part of that desperately again.”

No two crowds at a Beach House show are alike, as their expansive catalog draws fans both seasoned and recent.

“Every tour is a different fabric. You look out and it’s just different people there, there’s new people,” Legrand said.

“Doing this kind of interview, or thinking about Grand Rapids, or touring at all, does make us think about the past in a kind of a wonderful way… It all means something to us, and it really is all so special because we know that it’s all fleeting. We probably won’t be able to do all of this forever.”

Despite what might not be forever, Beach House’s budding release of Once Twice Melody and current tour keeps Legrand and Scally focused on the present moment. For the inspired duo that have lived inside of Beach House for the past 16 years, Legrand and Scally model that what can be experienced today is always more important than what is planned for tomorrow.

“The future is uncertain for everything, everyone,” Legrand said.

“I think all you can really do is try to work as hard as possible and enjoy each day, and be kind to somebody. It’s kind of all there is.”

Tweet
Published in On Tour
More in this category: « Caamp: Chill Vibes, Warm Hearts Greta Van Fleet: What Dreams May Come »
Login to post comments
back to top