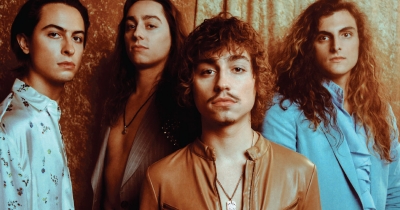 It’s incredibly rare for West Michigan to be the starting date for a massive international tour. It’s even rarer for a band to play a string of five huge shows across our state, on their way to even bigger concerts in Mexico, South America, and Europe.

Yet, for anyone who’s followed the story of Michigan native sons and once in a generation rock superstars Greta Van Fleet, this moment goes from feeling rare to feeling right.

“This is actually the first return that we really get, not just in Michigan, but to touring in general,” Greta Van Fleet bassist/keyboardist/vocalist Sam Kiszka told Revue.

The band did a short run of sold-out specialty shows last summer called Strange Horizons, amid a lull in the pandemic. But it felt, well, strangely fleeting. And with the delta and omicron variants disrupting life in the months since then, the anticipation for this tour couldn’t be higher.

“Michigan is going to be the first reentry into the world of touring, and also playing the really big rooms, Kiszka said about the Dreams in Gold Tour, which will take the band around the world. “I think it’s really cool to start in Michigan with that. It’s a journey that Greta Van Fleet and Michigan have almost shared together, starting in the little bar rooms in Detroit and Saginaw.”

For those who haven’t followed the band’s skyrocketing success, Greta Van Fleet formed in Frankenmuth, Mich., in 2012 by twin brothers, vocalist Josh and guitarist Jake Kiszka, alongside their younger brother Sam on bass. Drummer Danny Wagner joined a year later, solidifying the young group, who quickly started selling out shows while still in their teens.

Soon they were fielding record label offers, and hearing their music on the radio, with their song “Highway Tune” hitting the airwaves in 2017.

By fall of 2018 they released their first full-length record, Anthem of the Peaceful Army, having earned the approval of rock royalty like Sir Elton John, while facing unrelenting backlash for their stylistic similarities to blues rock legends Led Zeppelin.

Their 2019 appearance on “Saturday Night Live” spawned a TikTok challenge, and surged their streams and record sales once again, before the pandemic hit, and everything came to a screeching halt for the band.

“I think it was necessary and it was painful at the same time,” Kiszka said about the pause the pandemic put on everything. “I think that if we kept going like we were, Greta Van Fleet would’ve met its eventful ending sooner than later, just because we were touring a lot, we were writing a lot, and we were recording a lot, but I think we needed a break to get a handle on what was going on around us and within us.”

Right before lockdown back in 2020, the band had relocated to Nashville to be nearer to what Kiszka calls the “immersive music infrastructure” there. The band began booking writing cabins in the forest and working on more new music, putting the finishing touches on their second full-length album, The Battle at Garden’s Gate.

With touring stopped, the album’s release got pushed back to spring 2021, and when it finally emerged, it landed on the top of Billboard’s Rock Albums Charts.

“I think this was the perfect album for this time period, however, it wasn’t intentionally written like that,” Kiszka said. “Because what we did is we recorded most of the album before the pandemic even happened. So the last two songs that we recorded, ‘The Barbarians’ and ‘Caravel,’ those were the only songs that we recorded during quarantine. But I think it really represented the times and all the isolation.”

Kiszka added that he feels The Battle at Garden’s Gate much more accurately reflects Greta Van Fleet’s musical evolution as artists, and stands as their definitive record.

“I think it’s a perfect representation of Greta Van Fleet,” he said. “Funny enough, when the first album came out I feel like we outgrew it relatively quickly. But with The Battle at Garden’s Gate, I could listen to it today, and think, ‘Wow, this is awesome.’ I wouldn’t have changed a thing about it. And I hope it’s always that way. I think it’s relatively timeless.”

The band plans to interweave the songs off the album with their older hits on the upcoming tour, which the band has worked on every aspect of, from art design to outfit selection, in order to bring to life an immersive experience.

“It’s a huge responsibility for us,” Kiszka said about welcoming crowds back to an arena-sized rock show. “The way that we’ve always looked at it, it’s like whomever might have a really shitty job, they might be digging up ditches every day, and why is it that they would spend their hard-earned money on a Greta Van Fleet show, and the reason for that is because we curate it, and we spend every moment that we can putting this thing together, and making sure that it’s above and beyond, that we hit every facet of what a great show should be. So I’m really excited for it, and we’ve been waiting for this forever, and it’s finally getting close.”

Tweet
Published in On Tour
More in this category: « Beach House: A New Chapter Wolf Alice: Howling at the Blue Moon »
Login to post comments
back to top