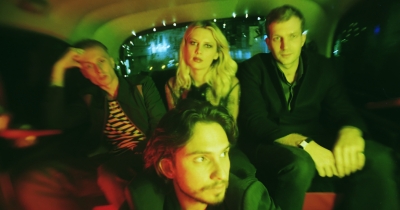 For a band like Wolf Alice, America is still a wonderland.

The London-based band has amassed tremendous acclaim and clout in their homeland in recent years, since starting out as an acoustic duo more than a decade ago.

Made up of vocalist/guitarist Ellie Rowsell, guitarist/multi-instrumentalist Joff Oddie, bassist Theo Ellis, and drummer/multi-instrumentalist/backing vocalist Joel Amey, the band has brought its grunge-inspired alt-rock and folk-tinged dream pop into the new millennium.

Their follow-up, 2017’s Visions of a Life, exploded the band’s profile in the U.K., receiving the Mercury Prize, which is awarded to the best album released by a British or Irish act each year, putting them in the rare company of P.J. Harvey, Arctic Monkeys, The xx, James Blake, and others.

They toured the album relentlessly, hitting major festivals all across Europe, and spending over 18 months on the road, to the point of nearly burning themselves out completely.

And then the pandemic hit.

Released in June of last year, Blue Weekend, continued the band’s success, landing at No. 1 on the U.K. charts, and earning widespread critical acclaim for its cinematic scope, emotional depth, and dynamic range.

“We were able to really focus on things, like sequencing a bit longer, because certain deadlines were left more of gray areas than before,” Amey said of how the pandemic allowed the band to really explore their sound on Blue Weekend. “I think the record is all the better for it… There’s lots more structure and like refinement to these songs than the previous records. It’s not just about getting everyone jump up and down as hard as they can, there’s different textures that we hadn’t done before.

“So it’s been a challenge bringing those to the stage,” he added. “And to see people react to the songs that you go, ‘Oh people really go for that one the most!’ That’s been really fun to watch, and that’s because of the time we’ve had to refine things and put them forward.”

“Half the people didn’t know who we were, so it brings you to their attention,” Amey said of winning the award. “There was no way we thought we were going to win a Brit Award. It was a fun night, and we were in a room with some very big people, which from a people spotting point of view was quite nice, like we got to play pop star bingo.”

Here in the U.S., Wolf Alice continues to climb more gradually, with their new single, “Smile,” off Blue Weekend, returning the band to rock radio, as they’re set to return for a tour in support of the new release.

“I still can’t believe we get to tour in the U.S.,” Amey said. “I’ve always said I’ve got a deep romance for this idea of playing across America.”

He added that the band has embraced the challenge of recreating the various vibes on its new album live, focusing more on having the emotions of the songs hit in the same way they do on the album, than trying to play the songs verbatim.

“I love playing live, it’s such a big part of what our band is,” Amey said. “We’ve spent lots more time on the road than we have in a studio. We’ve grown together as people and as friends over the years, and gone through so many experiences I don’t think we’d ever dreamt of in years. So after the uncertainty that was the pandemic, and the great tragedy that was the last couple years, it’s such a great honor that people would choose to come to our gigs again so soon after.”

Tweet
Published in On Tour
More in this category: « Greta Van Fleet: What Dreams May Come Kaleo: A Voice of Nature »
Login to post comments
back to top