Kaleo: A Voice of Nature 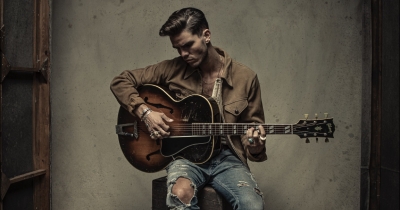 Although they’re from Iceland, rising blues-rock band Kaleo takes its name from half a world away.

The word Kaleo is actually Hawaiian, and it loosely translates to the sound, or the voice.

Speaking with the voice of Kaleo himself, frontman Jökull Júlíusson, who goes by JJ, the topic of preserving his voice while out on tour during these strange COVID times comes up immediately, as he recently came off extended vocal rest following a bout with the virus earlier this year.

“I lost my voice completely, which was devastating,” Júlíusson said. “What I do onstage is extremely challenging, and my voice takes a beating, so I have to take extremely good care of myself.”

During his rest and recuperation, Kaleo had to reschedule several shows on their current Fight or Flight Tour (coming to GLC Live at 20 Monroe April 28), which followed a series of delays that kept pushing the tour back from show dates originally planned for as far back as 2020.

More determined than ever, the band has powered through, facing down dangerous high winds in Texas, and tour bus breakdowns along the way, in addition to ever-changing COVID precautions.

“I think that we all feel like things are getting back to normal more and more every day,” Júlíusson said. “You can feel that people are just ecstatic and excited to be back to concerts and experience live music again.”

Kaleo is returning to the live stage in support of their latest album, Surface Sounds, which they released last year during the pandemic. The album is the follow-up to their 2016 breakout smash, A/B, which features their hits “Way Down We Go,” “All The Pretty Girls,” and the Grammy-nominated “No Good.”

The band has amassed well over 2 billion combined streams, performed all over the world, from South America to Russia, including being handpicked to open for The Rolling Stones, and hitting major festivals like Bonnaroo, Lollapalooza, and Coachella.

Most recently Kaleo became the first band from Iceland ever inducted into the Grand Ole Opry in Nashville, which also happens to be Júlíusson’s home here in the U.S.

“The city is growing at a crazy fast pace right now, but it still has that little town charm when it comes to the music scene,” Júlíusson said about living in Nashville. “It’s kind of like back home in Iceland, like once you’re in a circle, everyone is a phone call away. So it’s easy to get work done, and that’s the most important thing.”

Kaleo was on tour when the pandemic hit, and decided to go back to Iceland, staying home and reconnecting with family and friends there for longer than they ever had in the years since starting the band.

While working around lockdown, the band shot and released a series of breathtaking live videos from remote locations all around Iceland, including inside an ice cave (“Backbone”), beside an active volcanic eruption (“Skinny”), and on top of a staggering rock island in the middle of the ocean (“Break My Baby”).

“The one in the ocean was very challenging,” Júlíusson said. “I think it took 16 helicopter rides, 28-32 hours straight. Technically because we’re playing live, we have electric generators and other things, which just makes it extremely challenging. But it was an adventure too.”

All shot for songs released as singles off of their new album, Surface Sounds, the videos showcased the natural splendor of Iceland, and Kaleo’s equally powerful performing chops. It also alluded to the band’s concerns for the fragility of the natural world, particularly the problem of climate change.

“I don’t like to be too political,” Júlíusson said. “I think first and foremost it’s about the music, but I think we all owe it to the world to be aware of climate change. I think it’s unavoidable, and we need to talk about it, and address that problem. So if there’s anything that I can relay or do something, I think it’s my obligation as a human being, and for the coming generation.

“I think in this crazy world that we live in now, life is happening so fast,” he added. “And with social media and everything, big problems like this tend to be in the spotlight and then they get pushed out as soon as there’s something else next week, like a financial crisis or a war in Eastern Europe. Those are of course important things as well, but I think that climate change is probably the most important of all.”

Continentally divided, but connected through their shared volcanic island energy, Kaleo feels a kinship with their namesake’s homeland out in Hawaii, even though they’ve only visited once. They’d love to return and possibly film a new video there, while shooting for even greater heights someday.

“We’d love for a billionaire to help us be the first band in space,” Júlíusson said. “That’s definitely the dream, but we don’t have that kind of cash.”

Tweet
Published in On Tour
More in this category: « Wolf Alice: Howling at the Blue Moon Modest Mouse: Seeing the Unseen, Hearing the Unknown »
Login to post comments
back to top