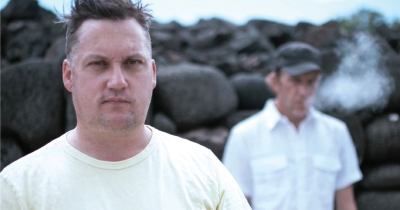 “I hadn’t done that math, and I wish I hadn’t,” Brock joked with Revue over Zoom, recalling his band’s origins back in the ’90s. “But why not? What am I talking about? It’s great. I still love doing it. Which is weird, because I didn’t, like, when I was young.”

Early on he thought he’d do the project for 10 years, and then see what was next. And instead he just kept going with it.

Modest Mouse’s first two albums, 1996’s This Is A Long Drive For Someone With Nothing To Think About and 1997’s The Lonesome Crowded West, became beloved fan favorites, setting the stage for the band’s major label debut, 2000’s The Moon & Antarctica, to emerge to near universal critical acclaim. Followed by their 2004 album Good News For People Who Love Bad News, and its now ubiquitous hit, “Float On,” Modest Mouse secured its spot on the alt-rock airwaves.

2007’s We Were Dead Before The Ship Even Sank took the band to even bigger heights, landing them at No. 1 on the Billboard 200, and onto major festivals around the world.

Lineup changes and other challenges lead to an eight-year gap before the release of the band’s next album, 2015’s Strangers To Ourselves, which topped the alt-radio charts with its lead single “Lampshades on Fire.”

The band’s epic catalog has inspired countless bands, arguably making Modest Mouse among the most influential bands of their generation and genre.

“Well that just feels good,” Brock said. “You can’t hear that and feel bad about yourself. It’s worth remembering that for every one person that feels that way about you, 10 of them hate your face. And that’s something that I think has gotten amplified by the way everyone communicates. The various social media, and forms to how we communicate. Being an asshole has never been easier. There’s just people ranting and sitting there angry at words apparently, and your name’s in there. So that’s wild, but I think, it sure is nice to run into people who like you.”

Well before social media raddled our collective brains, Brock had examined the collision of modern technology and the natural world, channeling his own 21st Century paranoia, and surprising optimism into his songs as a way of processing humanity’s changing place in the world, and his own sanity.

“We’re a smart and hairless animal without very big claws,” he said. “We all need technology in its various forms and, you know, I’m not a Luddite or anything. I also use technologies, just different ones, primitive ones. But when you unleash new and unfamiliar technologies, there’s a lot of room before people actually understand what the impact is on anything, from the impact on the person, the civilization, the environment.”

On Modest Mouse’s latest album, last year’s The Golden Casket, Brock explored that space, the seen and unseen world all around us, affected in unknown and unexpected ways.

Before working on The Golden Casket, Brock said he spent time recording a bunch of noises, and dabbled in forensic audio, to help open up his brain to thinking about music outside of what could find with a guitar.

“This is something that I’ve been digging more and more and more into, and it’s kind of making music make more sense to me,” he said. “This isn’t new information, but there’s definitely new ways of looking at it, which is the way different tones actually physically affect us.”

Brock explained that he sleeps to binaural tones and rhythms every night, based on the “wishful thinking” and laboratory research that they can help with brain health.

“Sounds that help trigger the parts of your brain that help you sleep, or the parts of the parts of your brain that wake up the janitors to clean the plaque off your brain to stop Alzheimer’s,” Brock said. “That’s one of the reasons music’s been around so long, which is to say forever, and why I like doing it so much. I like making a combination lock of sounds that somehow is affecting the quote soul or, like, overall mood. When I find myself wanting to lean away from anything that I feel causes strictly negative feelings, I guess it’s pushing me more and more into the pop department.”

The Golden Casket combined a variety of unconventional sounds and instruments into Modest Mouse’s unique presentation of pop music, which then proved daunting when the band took the songs out on tour. Using drum pad samples and other triggers, the band has gotten more tech savvy, and weirder, bringing new life to the experimental studio project onstage.

“It’s sometimes the nature of the beast that often makes songs heavier live,” Brock said. “Like, I’ll go back through and listen to a live version to see how that’s going, and I’ll be like, ‘Why are you yelling a mellow song?’ And so I’ll back it up for a few days, and then find myself back to same spot again. Because there’s so much energy and things when you’re playing live, it’s important to remember to be subtle, too.”

Brock added that Modest Mouse is “inches away” from releasing the second part of The Golden Casket, which will likely come out as a deluxe version or EP, pulling from songs he had worked on both before and after the album’s recording sessions, including “Rivers Of…” the first new Modest Mouse song with former and future bandmate, legendary Smiths guitarist Johnny Marr, who played with the band from 2006 to 2009.

Tweet
Published in On Tour
More in this category: « Kaleo: A Voice of Nature Better Together: Matt & Kim »
Login to post comments
back to top