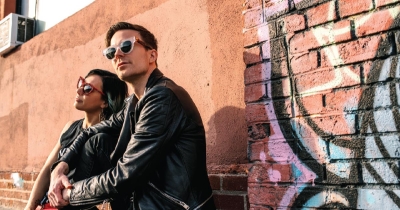 Indie duo Matt and Kim have been singing anthems of summer nostalgia since 2004. Through their illuminative stomp and holler hits, Matt and Kim’s songwriting captures sunshine on a soundtrack.

It’s easy to believe Matt and Kim set out chasing the limelight, with over 225 million Spotify streams on their top five tracks alone. However, garnering an enormous fanbase was never part of their plan.

“When we were coming up, there was just no expectation to be successful,” said Matt Johnson.

“The point was to play music.”

Johnson first met Kim Schifino at art school in Brooklyn, where Schifino was studying illustration. Before forming Matt and Kim, Johnson was still learning the keyboard, and Schifino had never played the drums. This led them songwrite for live performances instead of studio recordings, which is atypical for many musicians.

But let’s be real; it wouldn’t be Matt and Kim if they followed the status quo. Their audience-first compositions result in a recorded experience ablaze with charisma, spontaneity, and momentum mixed down into tidy tracks that feel full–not oversaturated.

“This is important to the fact that my entire adult life has been framed into being this live thing,” said Johnson.

Then came the COVID-19 quarantine.

Johnson and Schifino played it safe during lockdown, postponing any previously booked shows and not accepting any new gigs.

“Some bands were just going out and doing it, but we didn’t know what’s safe. I felt like doing the live show, getting a bunch of people together jumping around and screaming in each other’s faces, might not have been the best thing,” said Johnson.

As it’s been years since Matt and Kim have taken the stage, their previous performances play a unique role in supporting who the band still is today.

“Kim’s dad sent us footage of a show we played in 2007. It wasn’t necessarily a big show. There were maybe 100 people there, but they were all dancing and singing along,” said Johnson.

“We were in San Diego, which was basically, for a band from Brooklyn, the furthest we could be away from home. And it really made me remember how exciting and how fun that was.”

“I can even date this back to Western Michigan, to Kalamazoo, to going and playing at a coffee shop there called Rocket Star,” said Johnson.

“There might have been sixty people in Rocket Star, but I remember someone had to get a two by four, go into the basement, and put it underneath from the floor to the ceiling because everyone was jumping up and down. The floor was almost like a trampoline. It was flexing too far, and we were all nervous we were going to fall through into the basement.”

“A lot of bands look at small shows like, ‘oh this is just a stepping stone to get to the next place.’ But it’s not,” said Johnson.

“I wouldn’t say the joy is any greater at one than the other.”

Starting out as a new band today is water Matt and Kim don’t have to tread. However the pure, unaltered passion that made Matt and Kim successful over a decade ago remains a timeless example for musicians both seasoned and fresh to follow.

“Bands see other bands blow up on TikTok, overnight. They seem to be utterly successful. I think sometimes bands are frustrated when that doesn’t happen to them,” said Johnson.

“It goes against what your parents might tell you, or what your teachers say, to have goals, but I’m like what goals? Have no goals.”

This mindset brings the present moment back into focus, which is the most critical part of successful musicianship to Johnson.

“That’s the key to being happy in the profession, is don’t have goals. Just enjoy it while it’s happening.”

With an unreleased project on the horizon and a few live shows booked on the calendar–including a stop at Kalamazoo’s Bell’s Brewery on June 4–Matt and Kim is back and more excited than ever to keep bringing the joy of live music to their fans.

“Someone stopped me before a show a couple weeks ago and was like, ‘Thank you for coming out, we’re so excited for the show tonight.’

“I was like, I know you’re saying you’re excited, and bands say stuff like this, but I’m legitimately more excited. I’m more excited to be here because this is such a big part of my life," Johnson said.

“The moment you’re in it is the best part about it.”

Tweet
Published in On Tour
More in this category: « Modest Mouse: Seeing the Unseen, Hearing the Unknown
Login to post comments
back to top