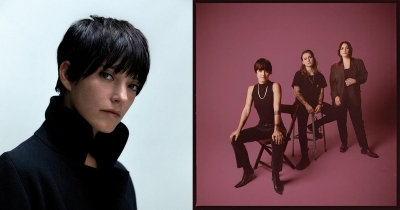 Over the past few years, singer-songwriter Sharon Van Etten spent a lot of time during lockdown working on her critically acclaimed new album, We’ve Been Going About This All Wrong.

She also spent a lot of time with her young son – having relocated her family from New York to California in 2019, just months before the pandemic – and found surprising inspiration in the beloved 1993 movie “The Sandlot.”

She had grown up with the classic coming-of-age film — it was one of her little brother’s favorites — and as she and her son and her partner cycled through all the kids’ movies they loved during COVID, it took on new meaning after many, many repeat viewings.

“We’re still watching it,” Van Etten said. “You know, they became my kid’s friends and it made us get a dog. And that sense of camaraderie when he couldn’t even be around other kids, and feeling like the odd man out, but then feeling accepted while being alone in the home with his parents. That movie was really special to us as a unit.”

There’s one scene in the movie that on re-watch number 44 or so, Van Etten said it struck her differently. It’s where the kids are trying to get back a baseball signed by Babe Ruth that got hit over the fence, and after many failed attempts create an extension for a vacuum cleaner to bring the ball back to them. In comedic fashion, it gets clogged, the dog bites it, and the vacuum cleaner explodes in a kid’s face. And as he’s walking away, covered in dust and shaking it off, he says, “We’ve been going about this all wrong.”

“And usually when we watch the movie, I laugh,” Van Etten said. “But this particular day I just had this sentiment, like a very helpless feeling, completely deflated with the ups and downs of the pandemic. And it was just like every time there is this feeling of hope, something else happened and I teared up. There’s something about it where it was like, ‘Yeah, we have been going about this all wrong.’”

So as she often does when she’s songwriting, she wrote it on a Post-It note, and stuck it to her computer in her new home studio, until she was close to finishing the album.

“In the end, it was this overarching feeling, not like I have the answers or I know what to do, or how to change my life, or how to be better. But it’s that concept of, we have to try. We have to think about it. We have to acknowledge that we must. We have to keep reminding ourselves that we can do something differently. And how can we maximize the good.”

Over the course of her decade-and-a-half career that now spans six full-length records, Van Etten has never shied away from confronting the darkness, in herself or in the world. But now, viewing the world as a mother and as a daughter, partner, sister, and survivor, she makes sure to help her listeners find hope as well.

“I don’t want people to think that I’m always doom and gloom,” Van Etten said. “I think I usually write when I’m in a dark place, and so that’s why my songs sound as such, and it helps me get out of it. But I want to remind people that I do have a sense of humor and I’m just reflecting on life and how to get out of those ruts, and how to get out of the dark times.”

When she released We’re Going About This All Wrong back in May, Van Etten didn’t release any singles from the record, and said she wants listeners to experience the album in its entirety so they can feel the full emotional arc.

As she’s slowly and cautiously returned to the road, Van Etten assessed the landscape of live touring in 2022, and decided to do something different. Teaming up with fellow singer-songwriters Angel Olsen and Julien Baker, who have both also recently released new records, she’s embarked on the Wild Hearts Tour, which will feature full live band sets from each of the artists.

“It’s such a hard time for fans to pick between shows, when they’re even weighing how serious it is or how safe it is to be able to go,” Van Etten said. “And as artists we’ve been talking about how do we make this best for our fans? And we thought if we’re all going to be touring around the same time, why don’t we just join forces and make it easier for fans to make the decision, and also just band together as friends that respect each other’s work and have an awesome night.”

The decision has already paid off, as the tour stop here in West Michigan, originally scheduled for Bell’s Beer Garden, sold out immediately, was moved to the Kalamazoo State Theatre, and has since sold out again.

Last year Van Etten and Olsen collaborated on the duet “Like I Used To,” and when asked, said that the “sky’s the limit” for onstage collaborations between the friends performing on this tour.

Looking further down the line, Van Etten said she’s not in a rush to return to a life on the road, having gotten a taste of domestic life, and plans to pursue the many other projects she has in the works, including writing more songs for movies, chipping away at a psychology degree, and possibly doing more acting after having appeared in the Netflix series “The OA.”

“I want to write about life and not about tour,” she said. “So I’m psyched for this Wild Hearts tour… and then when I get home, I really just want to be able to reflect and perceive work as it comes.”

Tweet
Published in On Tour
More in this category: « Better Together: Matt & Kim
Login to post comments
back to top