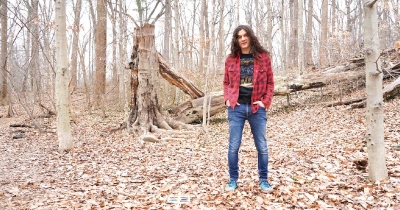 Way before hybrid schedules or Zoom calls, Philadelphia indie-rock singer/songwriter/guitarist Kurt Vile had long become something of a master of working from home.

Starting his career out with homemade tapes and CD-Rs back in the early 2000s, he referred to himself as “Philly’s Constant Hitmaker,” for his prolific output of signature psych-pop tunes.

During those early days Vile dreamed of working in big studios, where he could fill out his lo-fi sound. Yet over his nearly two-decade career, and nine full-length albums, he came to realize that what he always wanted was to work in his own space, with his own instruments, where he had the time and equipment to fully explore his own mind.

“Before the pandemic hit, my plan was to build my studio up and work from home more,” Vile told Revue from on tour in Europe earlier this fall. “And then I was forced to do all of that. And here we are on the other side of it. Like, back then we were wondering if there will ever be people inside again next to each other, and now I’m out here.”

Just before COVID-19 hit, Vile found himself feeling burnt out after touring for nearly two years straight in support of his last album, 2018’s Bottle It In. So the prospect of spending the pandemic stuck at home actually felt like perfect timing for him personally and creatively, despite the immense tragedy of it all.

“Honestly when I think back, I just remember the positive stuff,” Vile said, recalling working on his latest album, (watch my moves), during the pandemic. “Sure, I can think about moments of being freaked out, but all I see are the positive things that came of it. I guess the past few years I’ve just embraced being in the moment, but I’m lucky because I have a family that I can come home to.”

Besides being able to work in his studio, Vile also got to be at home with his wife and two daughters every day for the first time in his career, which affected him in more ways than just music.

“I always knew I was a good dad, but it’s true that it does make a difference if you’re there every day,” he said about spending two years with his family. “And now I already feel a difference in the opposite way. It feels weird to be gone, but that’s part of life too, and for those reasons, the family can meet me out in more exotic places later. If I go out and play some shows, then they can come and meet me, and it’s a good combination of work and a cultural education and vacation all combined.”

He’s now touring in support of (watch my moves), which was released this past spring, and is his first record for major label Verve Records – renowned for releases by The Velvet Underground, John Coltrane, and many, many others he greatly admires.

The record begins with Vile lyrically recollecting the time he got to open for the legendary Neil Young, on the song “Goin on a Plane Today,” before later nodding to another one of his major influences Bruce Springsteen with a cover of the deep-cut “Wages of Sin.”

Running nearly 74 minutes in all, the album allows Vile to stretch out his multi-instrumentalist tendencies and showcase his renowned finger-picking prowess, while also working with a slew of his friends and collaborators, including his band the Violators, longtime producer Rob Schnapf, and saxophonist James Stewart of Philadelphia’s Sun Ra Arkestra.

The album also includes a song Vile originally wrote for popstar Kesha, “Flyin’ (Like a Fast Train),” who had contacted him about possibly collaborating.

“I was so stoked to be connected with her in any way,” Vile said of working remotely with Kesha. “It was flattering to me because she’s from a whole other universe. She’s a popstar. And I liked her music, and I got more into it with my daughters, and she’s got anthems. So at the end of the day she just inspired me.”

Julia Shapiro of Washington indie-rock band Chastity Belt, who Vile will have out on tour with him when he returns to Bells Beer Garden in Kalamazoo Oct. 23, also appears on the album.

“Chastity Belt is one of my favorite modern bands,” Vile said. “Their music speaks to me. They have the hypnotic thing, and they have lyrics that are just beautiful and funny, and the songs are so well structured.”

Returning to the road, Vile said he can guarantee a great show as he and his band now have enough records that there’s enough “epic jams” to choose from to craft an exciting set list every night.

“There’s some telepathy going on, and we have enough variations in various sets where we don’t even have to think about it,” he said. “I was thinking in between tours, would we have to rehearse? And it’s like, no, actually we don’t, because we have these different avenues we can go down. The beauty of it is, the songs are relatively simple, but it’s like soul music where every night it’s a little bit different. It’s religious music in that way, its own visceral experience. That’s the kind of music I’m aiming to make, the kind that’s the extension of human emotion where you don’t think too much, just react.”

Tweet
Published in On Tour
More in this category: « Briston Maroney: In It For the Friends Jinjer: Fighting Back with Music »
Login to post comments
back to top