Jinjer: Fighting Back with Music 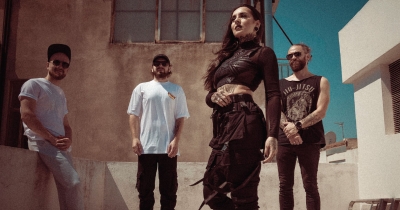 Just days after the widespread Russian attacks across Ukraine in response to the destruction of the only bridge connecting Russia to Crimea, Revue had the opportunity to speak with drummer Vladislav Ulasevich of the Ukrainian metalcore band Jinjer.

Currently touring across the U.S. on their latest headlining tour in support of the 2021 album Wallflowers (coming to GLC Live at 20 Monroe on Nov. 10), Ulasevich spoke about how hard it has been for the band to be away from their homeland and their loved ones during such a difficult time.

“It’s still a real war,” Ulasevich said when asked what he’d like Americans to know about what’s happening in Ukraine. “Two days ago, Russia bombed all Ukrainian cities. The center of Kiev was bombed. Bombed very hard. 13 people died. And it’s terrible. I just have no words to explain how hard people live now in Ukraine.”

Upon the start of the war in Ukraine back in February, Jinjer put their music careers on pause, to help focus on the relief effort. By June they had gotten special permission from the Ukrainian Ministry of Culture to leave the country and serve as ambassadors for the nation while they toured worldwide.

Even before Russia invaded Ukraine this year, Jinjer had long spoken out about the conflict between the two countries in their music.

The band first formed in Donetsk in Eastern Ukraine back in 2008, before going through some lineup changes and solidifying around virtuoso vocalist Tatiana Shmailyuk and guitarist Roman Ibramkhaliov in 2010. Bassist Eugene Abdukhanov joined in 2011 before the band later relocated to Kiev, where Ulasevich joined in 2016.

“I worked in a musical instrument shop, and Eugene just came to me and told me like, ‘Hey, man, we need a drummer,’” Ulasevich said. “And I just said, ‘OK, I want to be Jinjer’s drummer.’ It was easy. And I think in one month we started playing shows. So I learned like 10-15 songs with Roman.”

All his life Ulasevich had wanted to tour and play music professionally. He grew up playing the piano, and actually studied the instrument at university before switching to guitar in his band prior to Jinjer, and then ultimately drums.

Citing bands like Meshuggah and The Acacia Strain as influences, Ulasevich said he likes the extremely heavy side of the genre, and both his writing and technical playing reflect his preference for progressive, low-tuning, downtempo, groovy metal.

“I couldn’t even dream about (touring across the world) because bands from Ukraine, and especially metal bands from Ukraine – it’s underground music in Ukraine,” Ulasevich said about how surprised he is by Jinjer’s international success. “It’s very difficult to be a huge band from Ukraine. And even now, we need a lot of visas. We can’t travel around the world as easy as every European citizen or U.S. citizen. It’s a lot of paperwork, so it’s difficult, and metal bands in Ukraine; they have to work a lot harder.”

Jinjer has released four studio albums, three EPs, and a live record, the latter of which they issued after having their international tour stopped in 2020 due to the COVID-19 pandemic. The band has amassed over 250 million streams worldwide, and has toured everywhere from Europe to the U.S., Japan to Latin America, Israel to Australia.

“(We’re) the closest as it can be; we are like family,” Ulasevich said about the bond the band has travelling together, living together, and seeing each other more than he sees his girlfriend or his mother, who still lives in Kiev.

During the first weeks of the war this year, while the band was buckled down back home, Ulasevich actually wrote five new songs in spite of the onslaught around them.

“That time it was very scary,” he said. “We are sitting home, and I know that Eugene and Roman, they just couldn’t do anything. They were sitting at home scratching on Instagram, Facebook, and sometimes bombs were falling in our streets. And the only thing that I can do is sit with a guitar and just try to do something, not thinking about the war like every minute, every second. It’s helped me a lot.”

Touring the U.S. through December, and then heading back out on the road with Bullet for My Valentine in Europe in February and March, Ulasevich said he anticipates the band won’t go into the studio to record any of their new songs until late summer of next year.

“I think that the music that I created in that time, it’s good,” he said. “I hope once when we will release it, I hope everybody will like that. But it will be heavy and depressive.”

Tweet
Published in On Tour
More in this category: « Kurt Vile: New Way Home The Winery Dogs Coming to DeVos Performance Hall »
Login to post comments
back to top