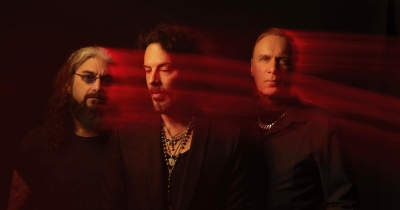 Vibrant powerhouse trio The Winery Dogs will be live in concert Monday, March 13, 2023 on the DeVos Performance Hall stage.

Following a seven-year break from the studio, The Winery Dogs are back in full force with their aptly named third album III, which is set for release on February 3, 2023 on the band’s Three Dog Music label (via Burnside Distribution/The Orchard) on CD and all digital formats—a vinyl edition of III will also be forthcoming in just a few months. III was self-produced by The Winery Dogs and mixed by longtime band associate Jay Ruston.

From the clarion call for connection and societal understanding in “Mad World” to the door-opening personal realizations of “Breakthrough,” to the undeniable muscle-flexing reign of the white-hot “Pharaoh” and the album-closing energy spillage of “The Red Wine,” all 50-plus minutes of III prove The Winery Dogs haven’t lost a step when it comes to conjuring fresh hooks, gutbucket grooves, and bold harmonies.

As III handily proves with each successive listen, just like a fine wine given the right amount of time to ferment and to breathe, The Winery Dogs keep on getting better and better with age.

Prior to the Winery Dogs, all three members have had successful careers with other bands. Richie Kotzen is known as a former member of bands Poison and Mr. Big, as well as having a consistent solo career with many albums released. Billy Sheehan is known for playing with Steve Vai, David Lee Roth, Talas, and Mr. Big. Mike Portnoy is known for being the original drummer of bands Dream Theater, Flying Colors, Transatlantic, Neal Morse Band, Sons of Apollo and Adrenaline Mob.

Tickets are on sale now for the March 13 concert at DeVos Performance Hall and may be purchased at the box office or online at ticketmaster.com. Purchase tickets in person at the DeVos Place box office, open Monday through Friday 11:00AM – 3:00PM and during select event hours. Ticket prices are subject to change. For current ticket prices, visit ticketmaster.com. Ticket prices may vary, as market pricing applies to all tickets. Prices may fluctuate based on supply and demand.

Tweet
Published in On Tour
More in this category: « Jinjer: Fighting Back with Music
Login to post comments
back to top