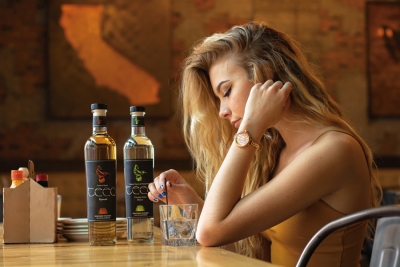 Hello Grand Rapids and allow us to introduce you to Teeq Tequila! Teeq Tequila is a premium tequila brand launched in August 2018 by three Michiganders who have a tremendous passion for tequila and furthering the agave movement.

“Our enthusiasm for this decadent agave spirit is unparalleled and our hope is to dispel the misconceptions surrounding tequila,” said Co-Founder Don Ferguson. “We wanted to create a platform to educate people on how tequila is made, how it should be enjoyed, and the traditions surrounding this wonderful spirit.”

Teeq Tequila is available exclusively in the Michigan marketplace and offers the world’s only Coconut Lime Blanco Tequila, which is made from the finest natural ingredient: the Blue Weber Agave plant. With an initial subtle hint of lime, this agave spirit is then followed by a cool and refreshing hint of coconut. Teeq Coconut Lime Blanco is a wonderful sipping tequila on ice, but also blends exceptionally well in many cocktails, including the most popular cocktail in America: the margarita.

Teeq’s second expression in our portfolio, which is just as unique and popular, is the Reposado. Typically, tequila is rested in white American Oak Barrels, but Teeq Reposado Tequila is rested in second-generation whiskey barrels from a very well-known brand. This process provides a complexity that takes on subtle tones of a whiskey while staying true to the tequila’s roots. Along with hints of caramel and vanilla, Teeq Reposado also absorbs some charring flavors from the whiskey barrels, making this an ultra-premium drinking experience.

Lastly, released in late September 2019, Teeq Blanco Tequila is no doubt the smoothest Blanco Tequila on the planet. With its hints of sweet agave, this is not the typical Blanco that most people are used to. No salt, no lime needed at all.

While Teeq Tequila is a proud Michigan-based company, to be considered 100-percent Blue Weber Agave Tequila, production must be done in Mexico. Teeq Tequila uses only the finest Blue Weber Agave harvested at seven years of maturity, from both the Highlands and Lowlands of Jalisco, which also provides another level of distinction as most brands only use one — not a blend of agaves.

“The response for Teeq Tequila in the Metro Detroit area has been incredible, so it’s time to focus on the West side of the state, notably, Grand Rapids,” said Co-CEO Mike Rowoldt.

Visit teeqspirits.com to find a store near you stocking Teeq Tequila or ask your local establishment to order Teeq Tequila for you through Imperial Beverage, our distributor.  Or, feel free to email us at contact@teeqspirits.com.

Thanks, we’ll see you soon!