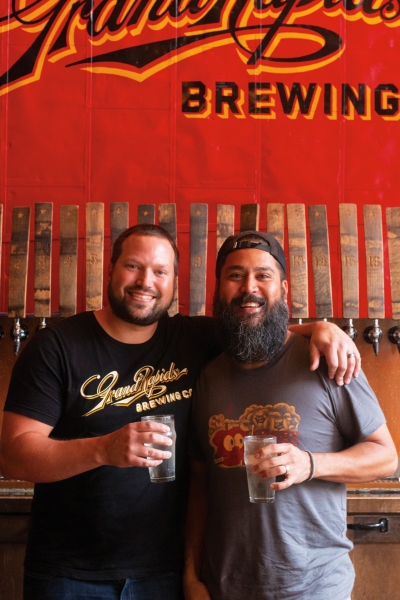 Here in West Michigan, we love beer. Ernie Richards, the brewmaster at Grand Rapids Brewing Co., and his partners Bobby Edgecomb and Alex Hartel get it, and they work their tails off to diversify the menu for craft-beer enthusiasts. But they also know not everyone is into beer. That’s why GRBC is always looking to expand the variety of handcrafted beverages available in the downtown Grand Rapids taproom.

“Just because we’re a brewery, it doesn’t mean we can’t produce a magical drink for every person who walks through the doors,” Richards said. “As long you’re open to it, we’ll get you the perfect drink.”

Earlier this year, the brew crew started experimenting with the popular genre of hard seltzers, in part because Richards’ wife is allergic to gluten and he wanted to make something she could drink. But also because, let’s face it, we like it too!

“We made it because we're not going to be in denial about how much we enjoy drinking hard seltzer,” Richards said. “Plus, it's refreshing AF.”

He built a simple recipe from fermented malt sugar water, as well as GRBC’s own top-secret magical unicorn yeast blend. The draft beverage, which clocks in at slightly above 5-percent ABV, is available in a variety of rotating flavors, such as raspberry lemonade, blood orange, pineapple and cherry. Most recently, Richards took a step away from fruity flavors with a juniper-infused cucumber-lime seltzer. The Helter Seltzers are made in small batches, which gives GRBC the flexibility to experiment and use feedback from customers in real time — a concept not only applied to hard seltzers, but all the beer created by GRBC’s brewing team.

In a city with a brewery on nearly every corner, GRBC stands out by providing a choice as soon as you walk through the door. And make no mistake, GRBC takes that choice very seriously.

“There’s not just a beer for everybody, there’s a beer for anybody,” Edgecomb said. “And if we don’t have what you’re looking for, let’s chat. We want to make beer people like.”

The palette may have expanded, but GRBC remains committed to the core mission of making some of the most innovative beer in West Michigan. Alongside staples like the John Ball Brown, Fish Ladder IPA and Rosalynn Bliss Blonde, GRBC ventures out to produce some tasty and innovative flavors like the summery Peacher Feature, a peach milkshake IPA, or Universal Rainbow Unicorn Princess of the Universe n’ Stuff, a soured fruit ale with raspberry, blueberry and lemon zest. Both brews incorporate Michigan fruit flavors for a crisp and stunningly delicious beverage.

A piece of Grand Rapids history

GRBC’s story began on New Year’s Day, 1893, when a consortium of small local breweries opened a large facility together in downtown Grand Rapids. Over the next two decades, they built a monumental brewery at the corner of Michigan Street and Ionia Avenue, on what is now the site of a state office building.

Capitalizing on the location’s ample supply of fresh spring water and a refreshingly drinkable flagship beer, Silver Foam, GRBC became one of the Midwest’s largest and best-known breweries until Prohibition brought that success story to a screeching halt. The brewery went through several iterations after it returned, including a stint on 28th Street in the decades preceding Grand Rapids’ current craft brewing boom.

The GRBC brand was later purchased by Mark Sellers, founder of BarFly Ventures, which operates Stella’s Lounge and the HopCat restaurant family. Sellers reopened GRBC at its current location in Grand Rapids’ thriving Arena District in 2012, 79 years to the day after Prohibition was repealed.

Located in the heart of downtown Grand Rapids, GRBC has since become a place for friends and family to gather, in a relaxed environment with a knowledgeable staff. Guests can sit near a window and watch all the hustle and bustle of downtown or check out the game room, which hosts a number of arcade favorites, plus shuffleboard and pool. GRBC is also gaining steam as one of Grand Rapids’ premier event spaces, hosting everything from family reunions to weddings.

Whichever adult beverage or downtown dining experience you’re in the mood for, you will find exactly what you need with your friends at GRBC. Find us online at grbrewingcompany.com.