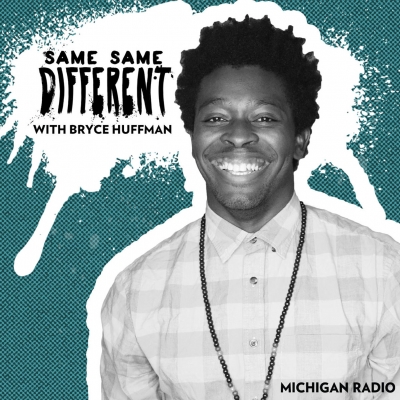 When your buddies tell you “we like you because you’re not like most black people,” should you throw down or lay low? How do you support your transgender kid when their own sibling thinks transgender is a misguided choice? What makes someone an “other,” anyway?

Michigan Radio, the state’s largest NPR news outlet, tackles these issues and more in its new podcast, Same Same Different. Hosted by Grand Rapids-based reporter and performance poet Bryce Huffman, the podcast explores identity and how to survive “otherness” with our full humanity and sanity intact.

As a young black man, Huffman spent years trying to figure out the best strategies for dealing with people and institutions that prioritize white America.

“I made the podcast to first process many of the experiences I’ve had feeling like an ‘other,’ and also to connect with people who have felt the same way,” Huffman said. “I wanted to deal with serious feelings and thoughts, but to do it in a humorous and empowering way. The show is really about these people coming from marginalized communities who really get hit hardest by this: people of color, LGBTQ folks, people with disabilities and religious minorities.”

Same Same Different also offers insights on how to be a better, more empathetic friend, family member, and human in the world. The podcast is produced by the same Michigan Radio team that created the Peabody Award-winning podcast Believed, including executive producer Jennifer Guerra and senior editor Sarah Hulett. That podcast, about serial sexual predator Larry Nassar and the team of female survivors, detectives and prosecutors who won justice in the case, has been downloaded more than five million times.

Where to listen to
Same Same Different:

Download episodes at Apple Podcasts, Spotify, NPR One, or wherever youget your podcasts.

You can also listen at michiganradio.org/different.

Tweet
Published in Sponsored Content
More in this category: « Why Grand Rapids Brewing Company Introduced a Specialty Hard Seltzer
Login to post comments
back to top