Nikki Glaser: The Stand-Up Who Never Sits Down 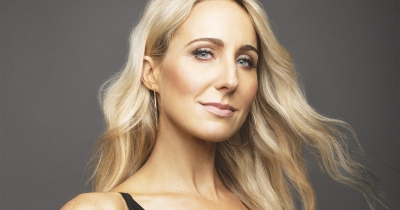 Since her debut special, Bangin’, recently debuted on Netflix, stand-up comedian Nikki Glaser hasn’t had a day off. Her tour, which stops at 20 Monroe Live this month, is packed with new, edgy bits about her most intimate moments — an honest style that’s made her a comic superstar. In between performing comedy on a daily basis and hosting her radio show, You Up, Glaser chatted with Revue from her home in New York City.

Living in Manhattan, do you keep busy trying out new jokes at the comedy clubs?

Yeah, I’m constantly working. I don’t take a night off. Either I’m on the road on the weekends, doing hour-long shows, or I’m in New York doing multiple sets. Last night I did four sets, each were 15 minutes. I just hop around from club-to-club. I do anywhere from two to six sets a night when I’m in New York. I’m addicted to it, and I’m going on this theater tour, so I wanted to have all of this new material really ready to go and sharpened. I feel like I’m training for a marathon, I can’t take a day off.

Since your special Bangin’ is out now, do you retire all of those jokes?

I don’t always retire material. Sometimes, I find new points of view on things. Sometimes there’s a bit that wasn’t done. I’ll find a new angle to it. There’s never something I’m doing just for the sake of killing time, it’s because I’m not done saying what I wanted to say about the it or I stumbled upon a totally new angle. I’m contradicting myself all of the time, but I call out that I am. I’m aware of it.

Juggling so much comedy, radio and television work — do you have time to enjoy the success?

It’s been a struggle for me, and a goal for me, as my schedule has gotten busier and busier, to be able to enjoy it. But I’m a workaholic. I overexert myself, but I’ve gotten really good at stand-up from it. Do I deserve a night off? Oh, hell yes. But I’m scared to stop. Scared it will go away. Scared I won’t know what to do with myself.

I picked a great job to be in, because it’s so fun. It often doesn’t feel like work because I’m hanging out with my friends on my radio show—but talking is exhausting and I didn’t realize that until nearly 17 years into my career. It’s like, “What are you complaining about? You just talk for an hour.” That’s a lot of energy that’s exerted.

I am having to pull back, but it’s hard to do get ahead. Usually, it just ends up with me showing up to a club crying because I’m so exhausted and I just don’t know what to even feel anymore. It’s just, “Go! Go! Go!” and then I overschedule myself. But that’s also why I have this success now. As I approach the last half of my 30s, I am really going to try to enjoy myself a bit more.

Looking back, you attended the University of Kansas for English? What would you be doing today if comedy hadn’t panned out?

I just picked English going into it because I was in AP English when I was in high school. So, I picked the easiest thing to do. I knew I didn’t want to be anything that wasn’t in entertainment. Originally, I wanted to be an actress, because I didn’t know anything. I thought, “Oh, that’s how you get on TV.” I wasn’t that good at acting. I didn’t care enough about it to get good at it. I’m a natural enough, but I just didn’t like it. I didn’t like theater and I didn’t like memorizing lines. I didn’t appreciate it the way other actors do. I was really bummed out because I thought there was no other way to get on TV. I didn’t know what I was going to do.

Then, I went to college and in order to make friends I basically reinvented myself. I was a lot louder than I was in high school, I was pretty quiet and shy in high school. In college, I finally spoke up for the first time and that’s when I first heard, “You’re really funny, you should be a stand-up comedian.” I was never told that before, so I thought, “I’ll check that out.” I started doing it and instantly knew it was the perfect thing. Not only was I naturally good at it —the first time I went on stage I had a good set — but it’s also something I cared about getting good at and wanted to commit all of my time to it.

So comedy never felt like work, even in your early days?

All of the work that went into it never felt like, “Ugh. What a struggle.” It was just what I had to do. I was lucky finding it early on. There was no other plan. The other plan was to kill myself. I didn’t want to be a mom, I didn’t want to be a teacher, I didn’t want to work in an office. I was really depressed at that time in my life, actually. I thought, “Oh, one day I will kill myself because I just don’t know what to do.” So, as dark as that seems, that’s the darkness that lead me into standup and having the point of view I have — which is pretty dark sometimes.

Do you recall writing your first comedy set?

I remember it. I was a freshman in college and everyone in my dorm took over the cafeteria as like a study hall. I went in there and instead of studying I just looked at them, judged them and tried to think, “What would Sarah Silverman say about these people?” I didn’t know how to write jokes — I just knew the stand-ups I knew. I wrote from the perspective of my favorite stand-ups because I didn’t know what my perspective was yet.

From there, I signed up for a comedy show on campus, so I gave myself a deadline. Then, I just sat down with a paper and pen and wrote. Looked around me and observed. Paid attention to conversations I was having and topics I was interested in. Now, I don’t sit down with a pen and paper ever. I just live my life and if I say something funny, I jot it down in my phone. I never really construct jokes anymore, they just happen onstage now.

At any point early on, did you dig back into old comics — the legends?

I was more interested in what people were doing now as opposed to what they were doing back then. Being in comedy for the last 17 years, I’ve seen it all. I’ve gone back and watched stuff, but when I was starting out, I was more interested in what my peers were doing. It’s an easy trap to get into if you watch the greats. You’re only two years in and you think, “Well, I suck compared to them. I’ll never be this good.” I discovered that comparing yourself to the greats is way quick to hate yourself and your act. I stopped comparing myself and started watching new comics around me. I was more into “who is new on the scene?” and “who are the fresh voices?” I continue to do that now. I get more inspiration from new comics as opposed to old comics. Although, sometimes you see an old Joan Rivers set and think, “Wow, she would never be able to get away with this on TV now.” You’d think back in the ’50s or ’60s, everyone would be so uptight, but honestly they were a lot looser back then, on some levels.

Was there ever a time your parents attended a show, and you were worried about telling your sex jokes?

I have to be honest with you: I’ve never considered it when they are in the room. It’s never bothered me. My parents always tell me, “Don’t let us affect you. Don’t try to cater to us.” They’ve been nothing but supportive. It wasn’t until I was taping my Netflix special, Bangin’, at one of the shows, and I saw my dad in the audience, stopped in the middle of taping, and said, “It’s so weird my parents are hearing me talk about this stuff. I just realized this. For the first time, I am feeling empathy for my poor parents who have to hear their daughter talk so brazenly about sex.” It was weird that was the moment it happened.

But since then, they were just in town visiting and ran around town and saw like 10 of my sets and each one I was very aware they were in the room. But I am experienced enough now to where I can still kill and not go as blue as I want to go. I can cater to different audiences. I don’t need to be dirty. I don’t need to be gross. I definitely changed some of my jokes around because they were there, because as you get older you get more empathy. But, when I was younger, thank God I didn’t have any, because it helped me not give a f***. I don’t enjoy offending people or making them uncomfortable. I don’t think that’s what comedy is about. It’s about surprising people, offending people is never my goal. The hypocrisy is that being honest is my goal, and if that offends somebody, who cares? But I never go in with the intent of upsetting someone. I think a lot of comics do.

After what happened with Kathy Griffin and Donald Trump, were you more cautious about what you say on stage?

Politically, I definitely watch what I say, because I believe if the president had his way, we’d be a lot like North Korea. So, I honestly do not like to talk about the president onstage because I am genuinely scared of retaliation. That’s me being scared for my own life, in a world where it seems like anything can fu****g happen. It’s not even that I don’t want to get cancelled. I don’t want to go to prison for the rest of my life or an internment camp because I said I disagree with the president — which is really what I think he would do if he could do it.

But in terms of (getting cancelled by the public), I just have to trust that I’m a good person. I’m not racist. I’m not sexist. I’m not ageist. So, if I say something that was misinterpreted with one of those things, it was obviously for humor, and if people don’t understand that, that’s on them.