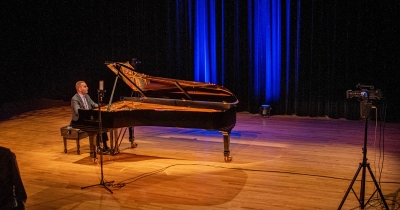 Though theaters remain closed in Michigan, Revue was invited to the premiere of The Irving S. Gilmore International Keyboard Festival’s virtual season, an experiment in bringing celebrated pianists to Kalamazoo for a live performance that is also live-streamed to a virtual audience.

To say it was a success would be a grave understatement, for it was nothing short of thrilling to be in the room with a great virtuoso performer playing his heart out in the Wellspring Theatre in downtown Kalamazoo for an audience of four masked, socially-distanced audience members as if for a sold-out crowd at Carnegie Hall.

Winner of The Juilliard School's 2019 Leo B. Ruiz Carnegie Hall Recital Prize and 2018 Arthur Rubinstein Piano Prize, Mackenzie Melemed, a recent Juilliard graduate, performed a varied program Sunday afternoon ranging from the Baroque to the 20th century. It “crossed centuries and emotional landscapes,” according to The Gilmore Director Pierre van der Westhuizen, and pieced “together key relationships of the evolution of music” according to Melemed himself, featuring works by Bach, Beethoven, Liszt, Debussy, Sibelius, Stravinsky, and Florence Price.

Though the small audience was accompanied by two cameras and generally withheld applause until the end of the performance, Melemed gave a riveting one-hour performance that was as engaging to watch as it was beautiful to hear.

Perhaps most unforgettable was Johann Sebastian Bach’s Partita No. 1 in B-flat Major, a six-part piece to which Melemed exhibited his deep emotional connection through his nimble fingers that danced on the keyboard.

At turns phenomenally fast and crisp as well as light-hearted, upbeat and trilling, he played as if his two hands belonged to different players, such was the distinct character of his interpretation and the physicality of the performance in which his left hand bounced and jumped over his right and at times leaped right on top of his right. It was sensational to watch and also captured with a close-up camera, no doubt to heighten the experience for the virtual audience.

Beethoven’s Sonata in F Major, Op. 54 in two movements showed off Melemed’s virtuosity and speed with a slightly different feel in this quick-paced, lively, bright selection at turns dark, almost sinister, and yet still crisp — with a bold and unforgettable bravura ending.

His exquisite management of silence tempered the deliberative, plodding, magnificently melodramatic Funérailles from Harmonies poétiques et religieuses by Franz Liszt in which a measured calm opened up to sweeping romantic beauty. As he built to an astonishing crescendo like a train building steam or troops marching in, sweat flew off his brow in a perfectly dramatic display in this gorgeously athletic performance.

Other noteworthy pieces included the lovely, brief interlude of Florence Price’s Meditation; the daringly percussive finale of Igor Stravinsky’s Étude No. 4 from 4 Études, Op. 7; Claude Debussy’s Estampes that sounded like a bold and elegant waterfall both crashing and trickling; and Alexander Scriabin’s somber yet hopeful Préludes, Op. 16, for which it was impossible not to visualize the choreography of a glorious pas de deux that should be set to it if only in one’s mind.

And that’s it in a nutshell. Beyond the extraordinary artistry on display that changed the energy and mood if not the temperature in the room, the gift of Mackenzie Melemed’s performance Sunday afternoon was that it reignited the imagination of those experiencing it — whether in the theater or at home.

In a Q and A after the show, Melemed said he learned much of the music in this program while quarantined in his Manhattan apartment. May artists of every stripe continue to find ways to create, and may the crucial members of our arts community continue to find creative ways to bring their work to us — despite the forced limitations of the pandemic.

We desperately need the imaginative exchange and alchemy that transfixes and transports us during these challenging times. The salvation of live performance cannot be forgotten or overlooked. 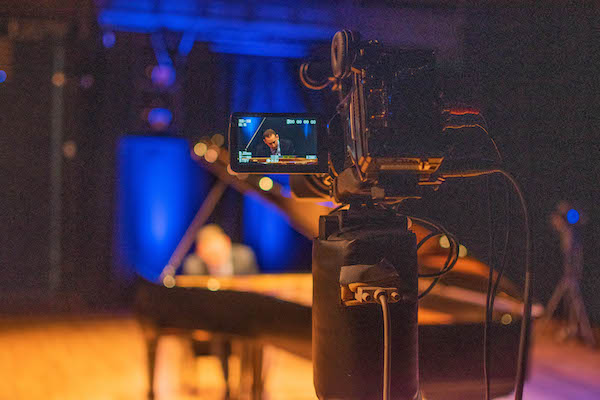