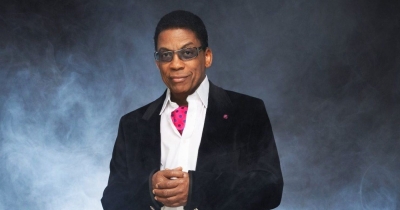 People lined up more than a city block long waiting to collect their tickets to see the rescheduled performance of jazz visionary Herbie Hancock Friday night in Kalamazoo as part of the 2022 Gilmore International Keyboard Festival. And by the end of the exhilarating 90-minute performance, nobody in the full house of Chenery Auditorium was mad about the wait.

Though the 82-year-old Hancock is in his sixth decade making music, the performance was every bit as funky and fresh as each new release he’s made and tracked since making his debut at age 11 with the Chicago Symphony Orchestra—throughout the twists and playful turns of his storied career, shaping music history and influencing and collaborating with countless other music geniuses, from Miles Davis to Christina Aguilera, Joni Mitchell to Beck to Stevie Wonder and beyond.

Surrounded by four keyboards, including a Korg synthesizer and a grand piano, Hancock and his phenomenal band made new six songs that were more like inspired movements with some familiar melodies in their warm, evocative, high-energy performance that encompassed classic jazz, funk, West African beats and techniques, electronica, hip hop, and more.

The show opened with “Overture,” more reminiscent of ambient music from Stranger Things than what one might think of as jazz, with Hancock saying “I hope you don’t mind, it starts out kinda weird,” and completed the set with an extra funky and joyful encore rendition of his band The Head Hunters’ 1973 hit “Chameleon” as if a nod to his incredible range and genre-bending indefinability.

The show itself was a celebration of sound through which the musicians played with expectations—of their instruments, voices, and genre—opening up the infinite possibilities of jazz.

They wended through a Wayne Shorter cover of “Footprints” arranged by trumpeter Terence Blanchard; “Actual Proof,” a song he recorded with The Head Hunters originally structured around the drums but ultimately “structured around everybody,” he said; a variation of “Come Running to Me” originally from the album “Sunlight” that sounded like sunshine and included Hancock using a vocoder to bend his vocals; and “Cantaloupe Island” that began surreptitiously with an incredible guitar solo that continuously moved in and out of the often-sampled melody driven by the trumpet.

Blanchard’s phenomenal trumpet drove most of the melodies, though each musician took turns with brilliant virtuoso solos throughout the night. They all expressed such joy in the making and playing of the music while Hancock’s tremendous humility and generosity of spirit set the tone. Terence Blanchard’s trumpet, James Genus’s often hypnotic melodic bass, Lionel Loueke’s guitar that sounded like a Hammond organ among other things at times as well as his soulful and at turns clicking vocals, and Justin Tyson’s explosive drums were more at the forefront than Hancock’s almost contextual keyboards.

However, at the very end of the show, Hancock got up from behind his keyboards downstage right, and finally took center stage with his white keytar for an especially lively solo played with such flair he ended it with a little jump kick.

And his band of terrifically innovative, award-winning musicians in their own right, physically bowed and praised the humble master, who quietly and graciously fist bumped audience members who approached the stage when the music stopped.

Before they had begun playing Hancock described his grandmother’s house in Lacota, just outside South Haven, where he spent time during his childhood summers. “So I feel at home,” he said, of being in Kalamazoo.

Though having just returned from a European summer tour, he made it perfectly clear that it’s in the music where he’s utterly at home, regardless of where he’s playing. And with his profound humility and generosity as a performer, and having provided so much of the soundtracks of our lives, he made us feel right at home with a truly unforgettable performance.