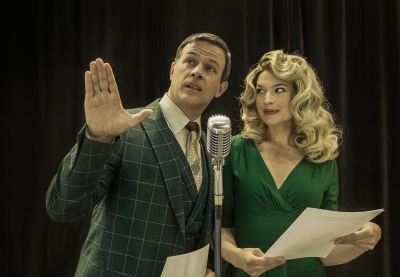 "It's a Wonderful Life" at Farmers Alley Theatre. Photo courtesy of Katherine Mumma

As Christmas traditions go, watching Frank Capra’s classic 1946 film “It’s a Wonderful Life” is a pretty beautiful one. The story of George Bailey, the small-town kid who longed to escape his humble beginnings only to remain in Bedford Falls and face the near-loss of everything, including his life — until a desperate prayer is dramatically answered by a modest angel, is a pleasing one to the religious and non-religious alike, and tugs at the heartstrings in a most universal way.

And at Farmers Alley Theatre as a radio play adapted by Joe Landry from the film with a magnificent cast, served with complimentary dessert and hot drinks to audience members clustered around tables cabaret style, the story translates in a most delightful way, and is an utter holiday treat.

As a radio play, the story unfolds, scene by scene, with actors standing behind microphones and performing from scripts on a stage dressed as a 1940s radio studio, complete with “On Air” and “Applause” signs as well as a piano. The story is delightfully interrupted with humorous ads in the style of the period as well as the entire cast performing early 20th Century Christmas songs such as “Winter Wonderland” and “I’ll Be Home For Christmas” among others.

Half the fun is watching the actors move from playing characters (sometimes several at once) into the microphone to one of the two stations for creating analog sound effects stage left and stage right. The pleasant tinkle of chimes, various types of shoes clicking, jellybeans dropping, a toilet plunger plopping into and out of a metal bucket of water, the smashing of glass inside a canvas bag are but a handful of the noises that augment the storytelling and are amusing to watch — most of which are executed by Brian Panse, who also plays George Bailey’s kid brother Harry among other characters with aplomb.

The other half of the fun is enjoying how this tremendously talented cast of seven interpret the beloved story and characters — and how magnificently it translates without visual scenes to accompany their voices.

Farmers Alley Artistic Director Jeremy Koch plays a charming George Bailey, capturing him from a boy to a weary, responsibility-laden man with a wonderful range of emotionality. It’s possible to hear lines we know by heart as if for the first time coming from him. And he has wonderful chemistry with Julia Burrows who plays a remarkably sympathetic Mary, his wife. Their budding romance and the complications of knowing and loving someone for years are made real.

Music Director Hal Hobson-Morse’s voice is marvelous for radio, and his narration of the radio play within the play as God directing Tim Eschelbach’s wonderfully naive Clarence the angel as well as the audience as to George’s history is magnificent.

Real-life local radio personality Lori Moore displays her mastery of vocal technique as she convincingly plays a multitude of characters, from darling little girls to the seductive Violet. And Ronald L. Centers is both incredibly moving and also a stitch playing multiple distinct characters in a single scene, most notably the affable Uncle Billy and ultimate villain Mr. Potter.

No doubt thanks to Sandra Bremer’s capable direction, the stage is always balanced, and these enormous personalities and the seemingly infinite characters they play are always clear and they never upstage one another. It’s easy to get completely drawn into the story no matter how familiar you may be with the original film.

Of course, it’s not only the film that’s evoked here, but also the era from which it emerged. Kathryn Wagner’s costumes and Steve Hodges’ wigs, George Eric Perry’s set, and Savannah Draper’s props all make it look and feel like the 1940s.

Which is entirely part of the simple charm of this tale, set back in time and told in a way stories have always been told — with our voices. Without the hassles and enhancements of modern technology, it’s a joy to slip into a different time and place this holiday season, and if only for a couple of hours to focus on how every life touches many others, that all is not ever lost, and that it’s our humanity that makes life worth living.

Tweet
Published in Theatre
More in this category: « Review: ‘Ochre & Indigo’ captures the innovation and powerful voices of local dancers Wish Granted »
Login to post comments
back to top