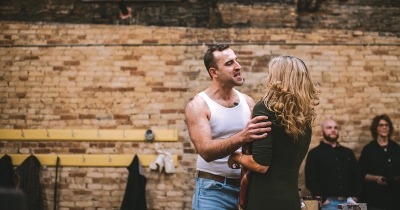 Late in the year 1992, a theatrical group in Springfield put on a show called Oh, Streetcar! The show, a musical version of Tennessee Williams’ A Streetcar Named Desire, opened with a warning about New Orleans (“If you want to go to Hell, you should take a trip/To the Sodom and Gomorrah of the Mississippi”) and ended with a rousing, upbeat number about the kindness of strangers.

Not every play merits a Simpsons parody. But then, not every play lasts more than 70 years. It’s a long journey from enfant terrible to venerable elder. Most never make it that far. A Streetcar Named Desire has inspired a hugely successful, highly lauded 1951 film; an opera; multiple ballets; a short prequel, directed by Gillian Anderson; and countless productions.

It is an icon.

“There are parts of the play that feel like a permanent part of the American psyche,” said Jean Bahle, who is directing Grand Rapids Civic Theatre’s upcoming production. She cites Blanche Dubois “in her faded finery” as one example. Another is Stanley Kowalski, drunkenly shouting “Stella,” the name of his wife. The trick is to make them new.

Sherryl Despres plays Dubois. She had auditioned years ago, but wasn’t selected. Recently, she has moved into film and television work, which she enjoys and which has the incidental benefit of generating a paycheck. The chance to play such an iconic role, as well as to prove something to herself, brought her to try again. And the clock was ticking. “If I didn’t do it now, I’d never get the opportunity. I’d be too old.”

Blanche Dubois, the fading Southern belle, is as resonant as the play itself. Casting about for someone to prop up her slanting life, she moves in with her sister. She has her charm and her clothing and not much else; she’s losing her beauty, or thinks she is, and substituting alcohol and bald flirtation in its place.

“She’s very charming,” Despres said. “She tries to be sweet. Also, she’s very smart — remember that she was a schoolteacher. But she wants magic. She kind of spins her own stories about what the world should be, not what the world is.”

Dubois sees herself as rich, if temporarily without money, and looks down on the poor people around her, including Stanley, her sister’s brutal, life-filled, darkly sexual husband.

John Vesbit, who plays Stanley, sees him as a rigid, insecure man whose outward confidence lies over deep insecurity. He first became aware of Marlon Brando’s film performance as a child and doesn’t brush aside Brando’s influence.

“This minimalist performance is influential,” he said, “not only in my own portrayal — but as an actor.”

Vesbit’s hope is to distill his various influences into something new.

Stella, Stanley’s long-suffering wife, is played by Rachel Varley. “Stella is grounded, protective and brave,” Varley said. She acknowledges the cycles of abuse her character experiences but will not consign her to a stereotypical victim.

Varley finds that few plays of the era “capture women as fully formed, three-dimensional characters.” Due to that, she rarely acts in plays from that time. “But I love Tennessee Williams. And I think he captures women in a complex and satisfying way.”

If Williams’ portrayal of women holds up, so does the shock of the play; those who only know the clichés — or who know nothing at all of the play — will likely be astonished by how dark things get.

“You don’t want to bring kids to it,” Despres said.

After learning she was to play Dubois, she was warned by other actresses to take care of herself. “It’s what did Vivian Leigh in,” she said. “You have to go there ... As an actress, you have to put yourself in that place.”

The role is known for taking an emotional and physical toll.

Women of the time were expected to be charming, Bahle said. “Cultured, deferential, not too smart,” and, more than anything, married. “We may have moved away from some of those expectations, but perhaps only incrementally. I think audiences could very much identify with Blanche’s loss of status, means of support, loss of her youth and beauty, certainly her pain and guilt, and her great fear of loneliness.”

The grim joke of the Simpsons parody is that you can’t always depend on the kindness of strangers.

Tennessee Williams, who must have watched others with sympathetic but clear eyes, knew that. And knowing that, he wrote a sad masterpiece. Early this year, Civic Theatre will present it anew.

Tweet
Published in Theatre
More in this category: « Peaks & Valli's: 'Jersey Boys' celebrates the journey of the Four Seasons Laughing Through the Tears: Actors' Theatre's 'Mary Jane' is highly emotional, yet decidedly unsentimental »
Login to post comments
back to top