Review: ‘Les Misérables’ remains one of the greatest shows to ever grace the stage 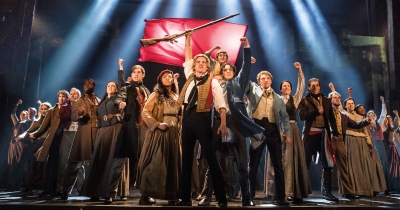 Thirty five years after its West End premier, it remains clear why Les Misérables is the second-longest running musical in the world and continues to attract swarms of fans on a new, transformed national tour. Its run at Miller Auditorium in Kalamazoo is a hit.

In many ways, it’s an unlikely popular success. The epic story, drawn from Victor Hugo’s exceptionally long 19th Century French novel, is set during a French Revolution — though not the one everyone thinks of — and spans two decades and dozens of locations over the course of three hours. The central drama is a policeman’s hunt to recapture a convict, though that convict (who did nothing more sinister than stealing a loaf of bread for a starving child) has become a most righteous man and pillar of his community. And the central love story isn’t romantic; it’s between that convict-turned-leader and his adopted daughter.

However, Claude-Michel Schönberg’s music with orchestrations by John Cameron (and updated by Christopher Jahnke, Stephen Metcalfe, and Stephen Brooker) is simply stunning; and it works elegantly to structure the story that is at turns dark, bawdy, romantic, highly dramatic, and full of characters who, though mostly flat, are wonderfully likable if not lovable — even the villainous ones. Jean Valjean’s Act I soliloquy is echoed by Javert’s in Act II; “Lovely Ladies” is mirrored by “Turning”; and “Beggars at the Feast” returns the dark hilarity and joy of “Master of the House.”

And technically speaking, even in the absence of the show’s iconic turntable imbued with symbolic meaning — a hotly contested and anticipated change — this tour’s show is visually fascinating, relying on Matt Kinley’s projected images based on Victor Hugo paintings that sometimes move to simulate travel, twists, turns, change in location into tunnels and other places, offering a creative and quite beautiful solution to necessary quick transitions.

But most importantly, those gorgeous songs are every bit as magnificent as they ever were as performed by this cast, particularly the men, who bring every ounce of energy, athleticism, endurance, and range to this challenging music that feels somehow imbedded in the cells of your body once you’ve heard it performed live.

Patrick Dunn is an exquisite Jean Valjean, his huge voice rich, alive, and bright. His “Let Him Live” is the show’s highlight. Though very nearly matched by Preston Truman Boyd’s powerful Javert, who’s truly wonderful as both an actor and a singer, and his vibrato is miraculous. Joshua Grosso is also a marvelous Marius, and his “Empty Chairs at Empty Tables” is a tear jerker. What he creates on stage with Pheonix Best as Éponine is a truly moving relationship, and Best’s rousing “On My Own” is a wonderful vehicle for her powerful voice.

As a musical that relies more on its music than its characters to evoke story and emotion, the orchestra, directed by Brian Eads, plays an enormous role, and they do so astoundingly well. The experience of Les Misérables is so very much about experiencing its stunning orchestrations live.

Alive it most definitely still is, not tarnished at all by time or changes. First-time ticketholders and those humming along to the score alike were improved for having spent three hours in the presence of such rare artistry and beauty midweek in Kalamazoo.

Tweet
Published in Theatre
More in this category: « And Eat It, Too Review: 'The Cake' is a delightful dive into life's tough choices »
Login to post comments
back to top