Review: Despite everything, 'Lost in Yonkers' finds joy 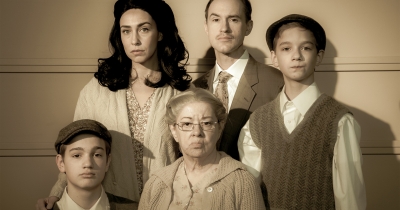 Neil Simon is one of the most prolific and enduring American playwrights, beloved for his nostalgia, humor and witty one-liners, even winning a Pulitzer in 1991 for “Lost in Yonkers,” arguably his finest work. Farmers Alley Theatre chose that finest work as their first foray in Neil Simon material, and it’s a wonder to behold.

Directed by Adam Weiner with a truly excellent cast, the show is all heart. The actors draw the depth of humanity from the beautifully-crafted family of characters who, despite the suffering inflicted on them, continue to find and create hilarity and joy within the four walls of the stern matriarch’s apartment just north of the Bronx in 1942.

The story centers on the way Grandma’s traumas as a German Jewish immigrant who survived seemingly infinite loss and death, including that of two of her own children, have shaped generations of the family, landing with her son Eddie’s two young teenage boys who must move in with her while their father travels for work to pay off the debts he incurred paying for their mother’s unsuccessful cancer treatments. Grandma resents them and pretty much everyone and everything else, including her four children, each uniquely strong and wounded because of the cruel manner she cultivated to survive and wears like armor.

It’s largely a coming-of-age tale for the boys, Arty and Jay, who amid facing their own grief and loss are experiencing their difficult Grandma in close quarters anew, though with guidance from their quirky aunts and uncle. The boys are played remarkably by darling real-life brothers Daniel Schubkegel and Ethan Schubkegel, both of whom have performed on stage at Farmers Alley and The Barn Theatre, and have already, at 11 and 13, developed impressive acting skills. They’re natural, convincing, funny, and largely responsible for driving the compelling story forward with nuance.

But it’s truly a tight ensemble cast full of exquisite talent, with several professional actors making their Farmers Alley debut. Notably, their performances are terrifically physical despite the limitations of what they’re given to do in the script, which largely is to talk. And their faces express nearly as much as their words, which emerge with delightful Bronx accents. This alone is a feat.

More specifically, Kim Maresca is marvelous as the child-like Bella, ditzy and confused, full of longing, and starved for touch and affection; Ellen Horst is like steel itself as Grandma, though she also, impossibly, inspires compassion; Matt Crowle is a phenomenal delight as Louie, the vaguely closeted mobster, and his interactions with the boys are a major highlight of the show; Brigette Sitarski is hilarious as the nervous, respiratory-afflicted Gert; and Trevor Stefanick is wonderful and warm as the boys’ father, Eddie, effusive, demonstrative, full of emotion, and with eyebrows that practically steal the show with their powerful yet subtle communicative abilities.

Before the show began, Artistic Director Jeremy Koch said privately that “Lost in Yonkers” would have just the one public performance. With heavy hearts, they have cancelled the run, many nights of which were already sold out. “It’s the right thing to do,” he said. Broadway is going dark, and it seems unavoidable that so will most theaters and public gathering spaces in the interest of containing COVID-19.

But it also seemed the right thing to review the show anyway, to describe what undoubtedly would have been a hit, because it, indeed, got it so right in spreading joy, compassion, and, as Director Adam Weiner said with a nod to irony in his curtain speech, “exactly the kind of thing we all need more of right now.”

Tweet
Published in Theatre
More in this category: « ‘Charlie and the Chocolate Factory’ is full of heart and pure imagination Losing Paradise, Finding Experience »
Login to post comments
back to top