Review: Barn Theatre's 'Rocky Horror Picture Show' Is One for the Ages 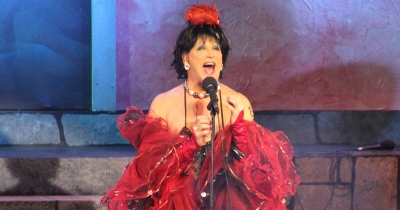 The Barn Theatre in Augusta is making people’s dreams come true in bringing their magnificent, fan-favorite rendition of cult-classic “The Rocky Horror Show” to the stage just in time for Halloween.

They’re doing “The Time Warp” again in this wickedly fun rock-and-roll musical comedy that parodies sci-fi and horror B-movies with this story of a newly-engaged conservative young couple who stumble upon a castle full of twisted characters who introduce them to the pleasures of fulfilling their deepest unexplored desires.

Rocky Horror is amazing for its longevity and how delightful and relevant it remains while also retaining its shock value and disregard for political correctness. It’s just the right combination of irreverence and high-spirited sexual deviancy that becomes normalized in this imaginary world with a cross-dressing criminal at its center.

The way we talk about gender, sexuality and identity, has changed dramatically since this story’s inception in the 1970s; and our definitions of acceptability and inclusion continue to evolve. And that’s what makes it all the more remarkable that this show keeps pushing boundaries and doing so with a rare combination of playfulness and darkness that folks just can’t get enough of.

As the story goes, the non-binary pansexual Dr. Frank-n-Furter, a delightful spoof on Dr. Frankenstein, has created a magnificent half-brained Adonis for his own titillation, though he also manages to seduce his unwitting guests, Brad and Janet. Meanwhile, a former delivery boy is murdered and dismembered, and creepy servants Riff Raff and Magenta reveal themselves to be otherworldly and running the show in ways no one imagined, which provides the ultimate plot-twist and denouement.

Audience members are encouraged to show up in costume—whether inspired by the characters on stage or of the general Halloween variety—and the die-hard fans will undoubtedly influence and change the show from night to night with their interactive participation and verbal interjections born of midnight showings of the 1975 film adaptation of the original 1973 musical. Holding up lighters and back-talking the actors with ad-libbed lines are as much a part of the experience as what’s scripted.

Rocky Horror creator Richard O’Brien, who played the original Riff Raff, said people can’t get enough of this show because it’s an updated version of a primeval human dilemma: “Brad and Janet are Adam and Eve, and Frank-n-Furter is the serpent,” he’s quoted as saying in The Guardian.

Alan Palmer is a truly spectacular version of this serpent in this reprisal of his 2019 role as Frank-n-Furter. He brings intriguing beauty and playfulness with the stage presence of a well-seasoned drag queen to create the full physical paradox of this sinister sadist who literally creates his own sex slave in a laboratory. He’s a marvelous singer to boot, and his “I’m Going Home,” is genuinely moving.

Other standout performances among a universally terrific cast who embrace the necessary campiness that makes this show wildly successful include Jason Kimmel as a perfectly earnest and nerdy Brad who together with Melissa Cotton Hunter’s sweet and sexy Janet create the naïve couple who unwittingly undergo fantastic transformation through gorgeous song and terrifying scream alike.

Steven Lee Burright plays well with the audience as they taunt him as the “boring” stodgy old narrator; Sydney Weiser is a terrific Columbia, full of frenetic energy and a surprising depth of emotion with her groupie’s heartbreak; Patrick Hunter’s singular number on stage as Eddie is physically memorable and vocally powerful; and Charlie King is wonderful as Dr. Scott.

The entire ensemble of Transylvanians/Royalty are fantastic characters; dressed in bedazzled tailcoats, torn fishnets, and hats of all varieties by Nettie Fischer with hair and wigs by Garrylee McCormick, they high kick, pelvic thrust, and otherwise “do the Time Warp” among other suggestive well-choreographed movement by Melissa Cotton Hunter from original choreography by Charlie Misovye.

The two-tiered set designed by Dusty Reeds with Steven Lee Burright’s artistic touches; lights by Michael McShane, plus a fantastic opening video montage of B-movie images choreographed to “Science Fiction Double Feature”; and sound by David King all beautifully support the successful concept of Director Brendan Ragotzy (who makes a rare appearance as a full-fledged character on stage as a very grumpy Riff Raff with excellent comedic timing—made all the more fun because he shares the stage with his IRL wife Penelope as a marvelously nasty Magenta and son Luke as a sweetly funny, wide-eyed Rocky).

This Rocky Horror, the thirteenth one produced at The Barn, is very much one for the ages, joyfully on offer for a responsive, hungry audience who is more than happy to play along in every way to co-create the incomparable experience. For seasoned veterans and virgins alike, even in a world that grows more and more gender and queer savvy, this amusingly shocking show is the perfect Halloween treat.

Tweet
Published in Theatre
More in this category: « Review: 'Off the Canvas' is a Triumphant Return to the Stage Farmers Alley Theatre: Slay Bells »
Login to post comments
back to top