Review: The Beauty of Life Shines in 'Every Brilliant Thing' 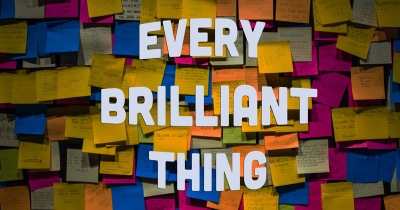 To live in the present you have to imagine a future that is better than the past. And that is a definition of hope.

This truism lies at the center of the very compelling “Every Brilliant Thing,” the one-person, one-hour opening show of Hope Summer Repertory Theatre’s 50th season that, though a contemplation of suicide, is also remarkably funny and hopeful.

The show is a remount from last year’s season during which most of the COVID-forced outdoor performances were rained out. This year, the show is mounted indoors, in the round; and having endured the pandemic now for more than two years, we are all no doubt still searching for signs of hope that the future will, indeed, be better than the past.

HSRT Artistic Director Lenny Banovez is the ideal actor to bring to life this story of a man looking back on his life trying to make sense of what it has meant to be the child of a suicidal parent who tried to save her but failed.

From the age of 7, the day that marked his mother’s first suicide attempt, he began making a list of “every brilliant thing” about life as a kind of argument to convince her to want to live. Ice cream is first on the list that also includes water fights, the color yellow, and people falling down. He gets creative about how to communicate the list to her, from post its to carving it into food items, and she resists him all the way.

As he grows from child to man, and both endures and enjoys his own life experiences (love, college, marriage) with his quirky point of view, and he continues working on the list, aiming to accrue a million brilliant things. Along the way he discovers the list has dramatically impacted his world view and served as a buoy for his own spirits as much as it was initially intended as a way to save his mother. In essence though, in trying to save his mother he ultimately saved himself.

Before the performance, Banovez and Stage Manager Jenna Keefer schmooze the audience members, handing out cards for them to read aloud entries from the list of brilliant things when from the stage he speaks its number. He also brings several audience members onto the stage to improvise roles and ultimately directs them as well as plays with them in a most delightful way. The audience participation and breaking of the fourth wall is a major part of this show’s charm.

But it’s Banovez himself whose infectious charm, ever centerstage, keeps this intriguing show from veering into depressing or sentimental territory. His boyishness, established at the start, never wanes, even as his character develops in age; and his storytelling and connection with the audience alone builds terrific scenes that though mostly pantomimed (with help from the audience members playing characters and props from Carol Chee), though imagined, are quite vivid.

And music, especially jazz and soul, represent the characters of his mother and father more than anything, with a grand piano in the imagined kitchen, which Banovez plays at times, and a turntable with records in another corner of the stage made real with terrific sound design by Tamir Eplan Franklin. It is the ultimate brilliant thing that makes life worth living, and we both feel and hear it exquisitely in the acoustically perfect space of the John and Dede Howard Recital Hall at the Jack H. Miller Center for Musical Arts.

Written by Duncan MacMillan with Jonny Donahoe (mercifully with nary a mention of “mental health” or “mental illness”), the conceit of “Every Brilliant Thing” is delightful and its effects powerful, and it’s made real with thoughtful and heartfelt direction from Laura Gordon.

It’s certainly a show worth remounting, a sweetly provocative start to an enormous anniversary season amid terrifically challenging times for live theatre. To see this show is to watch the contrasts of life and death we all know so deeply, and to feel not only affirmed but also hopeful.

Tweet
Published in Theatre
More in this category: « Review: 'Biloxi Blues' is Hilarious, Deep, and Timeless Playing My Small Part: Onstage with the Opera »
Login to post comments
back to top