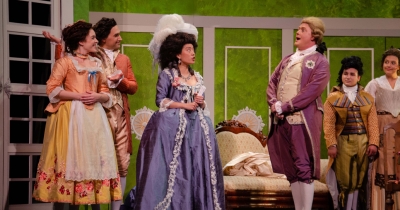 When Charles Morey adapted Pierre-Augustin Beaumarchais’ 18th Century “The Marriage of Figaro,” best known as a Mozart opera, in 2012, it was a success at least in part for how it reshaped the original farce, a wicked satire of the French aristocracy, to speak to the Occupy Wall Street moment.

Ten years later, the world has been transformed by the pressing shame and pain brought to light by Blacks Lives Matter, #metoo, and that little old global pandemic turned endemic; and we who are not of the one percent are acutely feeling the economic pinch of inflation the likes of which we haven’t seen in decades.

Given all that, is a sex farce created for a very different time and place relevant? Are the pursuits of pleasures by white men in power at the expense of those subject to their power something to laugh at? Is there still a place for the old gender-bending tropes and stock characters of the classic commedia dell’arte in 2022?

In short, when done as deftly as Hope Summer Repertory’s new production of “Figaro”, with a marvelously funny ensemble directed with joyful aplomb by Demetria Thomas, the answer is yes.

Because when have we needed to laugh out loud with abandon more than at this moment?

The story revolves around Figaro and his fiancée Suzanne who is fighting off the unwanted advances of the Count, who ultimately decides whether or not the two can marry. “What could go wrong?” is oft repeated as they, with others, scheme to foil the Count; and ridiculous complications, questions of fidelity, and instances of mistaken identity arise.

The outlandish situations are matched by the most delightfully cartoonish characters and larger-than-life performances that evade even the slightest hint of caricature while inspiring genuine belly laughs, often from surprising moments of seemingly spontaneous physical comedy.

Doors slam, men dressed as women jump out of windows, those hiding from one another slip beneath and atop furniture and roll through the garden; a mere cloak is enough to trick men of their wives’ identities, and secrets slip out plain as day despite the best efforts of terrible fools. The worst cads ultimately learn the most important lessons at the hands of the women they’re trying to cheat. Because it’s those brilliant women who, by surreptitiously joining forces, hold all the cards.

And in addition to the terrific talent (and smart writing), what makes this satire work so well here is we get to look at and make fun of that which has become taboo in a way that’s made especially satisfying when those who have historically been excluded from the storytelling are now front and center. Politics, including identity politics, is quietly turned on its head in the text and with this company driven by people of color as a matter of course.

HSRT’s “Figaro” is so charming, intelligent, and silly it’s bound to win over even the weariest and most jaded audience members, making relevant that which could be dated and using it to create comedy as the highest, and perhaps most necessary, of arts.