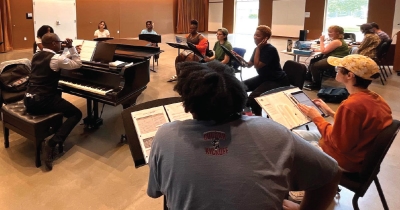 After two years of canceled or weather-afflicted outdoor seasons, HSRT is back with its biggest season yet, led by artistic director Leonard Banovez and associate artistic director Marcus Johnson, both in their fourth year with the company.

“We wanted to make sure, as we expanded, that it felt like a 50th anniversary within the town of Holland,” Banovez said. “Right when you pull into Holland, you get to see the marquee of everything. It feels like the 50th anniversary has engulfed the whole town. All of the founders are still here, so we are working with them to make sure that we are honoring the past, acknowledging all of those that came before us.”

“We wanted to do something a little big and get people excited about the season,” Johnson added. While the founders help them celebrate the history, Banovez and Johnson focus on putting up high-quality plays to show where HSRT is heading.

“The theme is honoring the past, while looking to the future,” Banovez said. It was only fitting that the preseason began with a look through the company’s 50 years of history through song, honoring the past while previewing the talent HSRT houses this year.

The rest of the season, running June through August, features nine diverse shows that run the gambit of theatrical genres.

Both Banovez and Johnson agreed that this season has been greeted with excitement and anxiety simultaneously — the residual effects of the pandemic are never far off.

“We have a responsibility to take care of our company and the community,” Banovez said. “This may be, since William Shakespeare’s time, the hardest time to produce live theater ever.”

Johnson noted that the learning curve of professional theater is steeper than ever before. Not only that, but no one has had to produce a true season in almost three years. Still, those challenges haven’t stopped HSRT from pushing boundaries.

“What we are putting onstage in terms of production value is probably the highest it’s been in my time,” Banovez said, adding that the technical feats in several shows rival those of Broadway.

“I have a greater respect for our technical staff than ever before,” Johnson said.

With the whole cast and crew loving what they do, the end result is multiple incredible shows this summer. Although Banovez said every show is equally anticipated, he is most excited for the young audience show, “Lulu and the Long Walk.”

“We’ve adapted a book from Holland into a musical for HSRT,” Banovez said. “Our young interns are having a musical written for them. They show up every day with new songs to learn.”

As part of GENext, a new program that encourages children’s exposure to theater, the show was written and composed by Ayesu Lartey, HSRT’s artist-in-residence from New York, and based on a children’s book illustrated by nationally recognized Holland local Joel Schoon-Tanis.

Meanwhile, Johnson said that he is most excited for “The Color Purple” to hit the stage, thanks to the beautiful message of hope and perseverance the show gives, and the pure talent filling the roles.

“Everyone exudes excellence in everything they do,” Johnson said.

Professional, passionate talent from all over the country come to HSRT every year for the summer season — many are local theater icons, or are coming from (or moving on to) Broadway. Banovez noted that a handful of alumni are Tony award nominees and recipients.

The company has a reciprocal relationship with Hope College that remains the same as established at its founding. The college provides the cast with housing and space for the season, and in turn, HSRT provides professional experience for the cream of the crop of Hope’s students.

Banovez and Johnson agreed that one of the main things that draws them to the industry, and HSRT, is the unity and opportunity for growth that theater creates, something that inspires their show choices and the messages they bring to audiences.

“Our mantra right now is ‘Hope is for everyone,’” Johnson said. “My dream is to see an audience even more diverse than our company currently is.”

“The groundwork we are laying has built a strong structure for HSRT to continue our mission of telling stories from a diverse set of voices,” Banovez added. “Theater can change the world.”

A Gentleman’s Guide
to Love and Murder

Lulu and the Long Walk

Much Ado About Nothing

Tweet
Published in Theatre
More in this category: « Review: Barn Theatre's 'Cinderella' is a Magical Marvel to Behold Review: 'The Color Purple' Is Nothing Less Than Divine »
Login to post comments
back to top