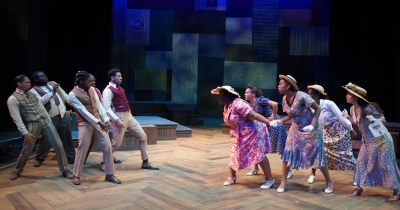 In so many ways it’s a devastating early 20th Century story of the American South, including devastatingly beautiful. For all the horrors Celie endures, she also undergoes a terrific metamorphosis, finding love and pleasure, her own power against all odds, and ultimately that God, rather than an outside force to which she must appeal, is actually within her. When she proclaims “I am poor, Black, I may even be ugly, but dear God, I’m here, I’m here!” it is an inspiring declaration of self.

And as perfect as Walker’s novel is, the revival of its musical iteration as Hope Summer Repertory Theatre’s final production of its 50th anniversary season is downright glorious. The richly-crafted characters and phenomenal story spring to life with a gorgeous score and a tremendously talented cast as well as simply elegant technical choices. The show itself is a prayer, a glorification of all Celie ultimately comes to praise—the light and the dark, all of it, shot through with beauty.

This is no small feat. But the wonderful music, heavily influenced by the wealth of Black American music influences, from gospel to jazz to neo soul, and at turns poetic, funny, and witty lyrics—by Brenda Russell, Allee Willis, and Stephen Bray—coupled with Marsha Norman’s book that hints at the aforementioned epistolary form and focuses on faith and its crises but also beautifully juxtaposes scenes for terrific efficiency of storytelling—under visionary direction from Marcus Denard Johnson, make for a vital and life-affirming musical.

The story begins and ends with Celie, and Tenayjah X. Hawkins is in full command of this challenging role, capturing Celie’s complexity of emotion with necessary understatement, showing the full range of Celie’s self discovery and self possession without sentimentality. Her transformation is emotional, physical, and vocal. Her performance is a masterful tear-jerker.

The relationships she creates on stage feel real; it’s as if the audience is undergoing her journey with her rather than merely witnessing it. That’s largely in thanks to the tremendous ensemble cast (and their universally unbelievable singing) and what they create together, from the sisterly love with Sierra Orr as Nettie, to the both romantic and motherly love with Jasmine Monét as Shug.

Brandon Alvión also masterfully plays Mister, Celie’s husband/enslaver. He’s despicable yet also deserving of compassion. While we hate him for his cruelty, we also come to understand his complexities, rooted in the systems of oppression at work on and through him. He’s in love with Shug, too, and he and Celie have in common their inability to tame her. He’s misguided all the way down, but sometimes has good intentions. We come to feel and know all of that through Alvión’s performance.

Other tremendously evocative performances include Madeline Grace Jones as a powerhouse Sofia whose “Hell No!” brings down the house; Corey Barlow as a perfectly clownish yet fully human Harpo; and Sirena de la Rosa, Jessica Coleman, and Alanna Carter as a marvelous Greek chorus of Church Ladies who punctuate the narrative with soulful rounds of song full of tremendous harmonies and wildly unique characterization.

They play out the 18 musical numbers on a simple, elegant, multi-leveled set by Tamara L Honesty that allows for infinite possibilities, traversing from interior to exterior, and a juke joint in the woods to a celebration of dance in Africa. The transitions between scenes are seamless and Mario Raymond’s lights that change both mood and the temperature in the room.

Chaz Sanders’ choreography is high energy, varied in style, often wonderfully sexy, and executed beautifully. Tony Toney’s period costumes are inspired, they play an especially important role in the narrative, and they move beautifully with the dancing.

There’s always an element of magic in great theater, but HSRT’s “The Color Purple” is nothing less than divine. It’s a rich, gorgeously-crafted, uniquely-American story in which the greatest of underdogs overcomes every socio-economic force stacked against her to fully become the person—and force in the world—God intended her to be. It’s beyond inspiring and a phenomenal end to a 50th anniversary season that has shown how relevant, necessary, and artful well-made theater continues to be in West Michigan.

Tweet
Published in Theatre
More in this category: « Hope Is For Everyone: Professional Theater in Holland Review: Rebellious, Joyful ‘School of Rock’ Is Beyond Fun »
Login to post comments
back to top