Review: 'Little Shop of Horrors' is the Ultimate Way End to Your Summer 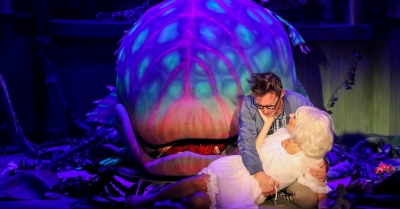 "Little Shop of Horrors" at Saugatuck Center for the Arts. Courtesy Photo

The musical “Little Shop of Horrors” originated 40 years ago as a quirky idea nobody but its creator thought would work.

Based on a 1960s cult B movie, the campy dark comedy skirts the edges of satire, horror, and science fiction with a terrific rock score by Alan Menken and a clever, tightly-written book by Howard Ashman. It was a smash hit off-off Broadway, made its way to bigger theaters and audiences and revivals and became one of the most often-produced musicals in the country as well as adapted for film.

The show has lasting appeal because it’s delightful, surprising, and weird. With a brilliant cast who deliver wonderful performances with real heart, thoughtful and effective technical elements, and really fine music, it’s especially worth seeing at Saugatuck Center for the Arts.

The story is narrated by a doo-wop Greek chorus of street urchins named after 1960s girl groups who help frame and keep the action moving, speak truth to power, bring the anti-capitalist themes to the forefront, and also bring a little levity to Skid Row as some really dark and twisted events unfold—but in the most adorable ways.

The adorableness is driven by Audrey, the squeaky blonde with a heart of gold and self image so low she never stands up to her sadistic, nitrous oxide addicted dentist boyfriend who humiliates her and beats her so bad she's got a black eye and her arm in a sling. In wonderful parallelism, the equally adorable, meek and earnest nerd orphan Seymour, Audrey’s co-worker, cultivates a murderous, man-eating plant from outer space that brings great fortune and then terrible despair to the fledgling flower shop where they work before threatening to take over the world.

Despite the violent, gruesome subject matter, Little Shop of Horrors at SCA is a wonderful, heart-felt comedy. The story may involve murder, abuse, and the lengths one must go to emerge from poverty, but here it really comes through how much it’s ultimately about hope, dreams, and love. All in a pretty, quirky, fun package that makes the most of a quick and witty script with catchy, memorable songs.

Director Kurt Stamm’s vision comes to fruition with a phenomenal cast whose significant talents turn cartoonish characters into living, breathing humans who sing magnificently and make us feel something much bigger than mere entertainment.

Nick Cearley gives us a nerdy, infinitely lovable Seymour with the grace and authority of someone who knows the role inside and out. We feel his anxiety and his longing. He is perfectly matched by Gina Milo who is an exquisite Audrey, capturing her sweetness and vulnerability with realness, making her hopes and dreams palpable from the first moment she sings “Somewhere That’s Green.” She’s the heart of this show, and together with Cearley creates an unforgettable “Suddenly, Seymour.”

Jeff Meyer’s crazy-eyed Orin, the sadistic and stoned on laughing gas dentist biker, is both terrifying and hilarious at once. His range is impressive as both an actor and a singer, and his versatility really shines with the various silly roles he plays. Additionally, Ray DeMattis offers a very natural performance as Mr. Mushnik, showing the characters softer side rather than playing him as a stock curmudgeon.

And what would Little Shop be without the plant, Audrey II, who is brought to life incrementally, growing larger and bolder and funnier and more terrifying with each scene, by Natalie Renee as the voice and Nathan Turland as the puppeteer in command of the fabulous creature by Matthew McAvene Creations.

Technically this show is fantastic, with Paul Collins’ set that allows for seamless transitions from various interior and exterior scenes lit with incredible attention to detail by Jen Kules. Darlene Veenstra’s period costumes along with James Leppa’s wigs magnificently help shape and create the vivid characters; and Mac Hamstra’s props are a stitch. And though this isn’t the kind of musical with big spectacle dance numbers, Jay Gamboa’s choreography makes everything move beautifully and offers impactful special touches such as a tango where you least expect it.

And the music is so good you can’t help but notice how well Music Director Joshua Keller and his fabulous band play the terrific score, not just as accompaniment for the gorgeous singing, but as an excellent performance in its own right (with sound design by Cameron M. Griffiths).

There could be no better way to celebrate the end of summer and the 20th anniversary season at SCA than with this wonderfully fun, colorful “Little Shop of Horrors” that offers the highest of arts. It’s a visual delight complete with excellent performances, a campy romp that’s also full of heart.