Review: Hope and Joy Abound in 'It's A Wonderful Life: The Radio Play' 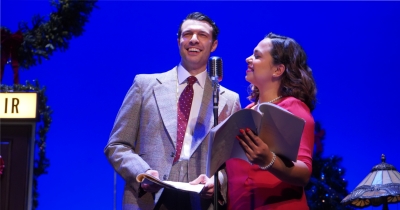 Michael Hanson and Amy Toruńo in "It's A Wonderful Life: The Radio Play." Photo courtesy of Hope Repertory Theatre.

With a story as beloved as that of George Bailey, the small-town kid who longed to escape his humble beginnings only to remain in Bedford Falls and face the near-loss of everything, including his life—until a desperate prayer is dramatically answered by a modest angel, it could be dicey to present in any other way than Frank Capra’s classic 1946 film “It’s a Wonderful Life.”

However, there’s new magic in Joe Landry’s 2006 adaptation of the film as a radio play, particularly as produced by Hope Repertory Theatre at The Knickerbocker Theatre in Holland—made all the more festive with hot cocoa, candy canes, and an opportunity to sit on Santa’s lap in the lobby before the show.

The story that is pleasing to the religious and non-religious alike, and tugs at the heartstrings in a most universal way, works beautifully as a radio play. It unfolds scene by scene, with actors standing behind microphones and performing from scripts on a stage dressed as a 1940s radio studio, complete with “On Air” and “Applause” signs to cue the audience to be participants of the broadcast. And the “broadcast” is delightfully interrupted at high-valence moments with what sounds like original radio ads from the period—for Ford and “Carter’s little liver pills.”

It’s a joy to be fully drawn into the performance and to watch how this tremendously talented cast of five interpret the story and characters—and how magnificently it translates without visual scenes to accompany their voices. The actors move from playing characters (sometimes several at once) into the microphones amid also creating drama with sound. The smack of a hand into a baseball glove, various types of shoes clicking, marbles dropping, garbage cans crashing are but a handful of the noises that augment the storytelling.

Daniel Alexander Rivera is marvelous as the narrator who also plays Uncle Billy, Mr. Potter, and many other characters with aplomb. He is convincing and distinct in each role. Brandon Ruiter also plays the angel Clarence in addition to many other roles, doing acrobatics with his voice as well as working on stage as the foley designer; and Staci Timmer is wonderful as Violet, Mrs. Bailey, Zuzu, and others.

Michael Hanson is a terrific George Bailey, making his emotional transformations palpable and allowing us to hear iconic lines from the film anew; and Amy Toruño is a warm and loving Mary who seems like a different character altogether when the script calls for it.

No doubt thanks to Demetria Thomas’s capable direction, the stage is always balanced, and as wonderful as it is to hear this radio play, it’s also engaging to watch—even when the radio actors take breaks, mingling upstage over drinks while the radio ads play. And the seemingly infinite characters are always clear and they never upstage one another. It’s easy to get completely drawn into the story no matter how familiar—or not—you may be with the original film.

Of course it’s not only the film that’s evoked here, but also the era from which it emerged. Staci Timmer’s costumes, Lenny Banovez’s set, Erik Alberg’s lights and sound, and Carole Chee’s props all make it look and feel like the 1940s.

Which is the tremendous charm of this production, set back in time and shared in the all-powerful oral tradition. Without the hassles and enhancements of modern technology, it’s a joy to slip into a different time and place the week before Christmas, if only for a couple of hours to focus on how every life touches many others, that all is not ever lost, and that "no man is a failure who has friends”—or as Director Demetria Thomas adapts the phrase in her program notes, “No one is a failure who has hope.”

It's A Wonderful Life: The Radio Play
The Knickerbocker Theater
Dec. 20-23
https://hope.edu/offices/hope-summer-repertory-theatre/on-stage/

Tweet
Published in Theatre
More in this category: « Review: Barn Theatre's Christmas Cabaret Overflows with Charm and Cheer The Book of Mormon: Don't Judge By Its Cover »
Login to post comments
back to top