In Dialogue at the GRAM 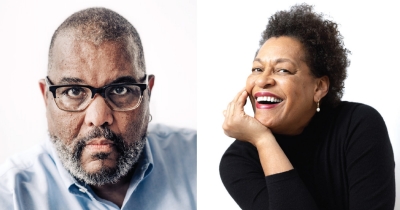 David Edward Smikle was born in 1953 in Queens, some three thousand miles from Portland, OR, where, that same year, Carrie Mae Weems came into the world. Both had an artistic bent: Smikle gravitated toward music; Weems to street theater and dance. The two wouldn’t meet until 1977, by which point Smikle had changed his name to Dawoud Bey.

Forty-five years later, they are both acknowledged masters of photography. Their strength’s evident. Take Bey’s photograph of Wallace Simmons and Eric Allums, from his Birmingham Project. The split portrait shows two males sitting in what appear to be pews. On the left is an older man. His arms are folded; his expression is skeptical. To the right is a young man, a boy, really. He, too, stares into the camera, but his expression is more tentative. They could stand in for innocence and experience, if they weren’t so clearly their individual selves.

Weems’ Harlem Street presents a neighborhood scene as rich as a world. Ten figures sit on the steps of, or stand before, a brick building. Most appear lost in their own world, none more so than the bespectacled woman who sits on a set of stairs, limbs akimbo and chin resting in her hand. Wherever she’s looking, it isn’t anywhere we can see. She’s distinct, but so is everyone in the photograph; each hints at stories we cannot know, but can only imagine.

Dawoud Bey & Carrie Mae Weems: In Dialogue is the first of its kind: a joint exhibition of the two photographers’ work. It will be on display at the Grand Rapids Art Museum January 29th – April 30th, before traveling to the Tampa Museum of Art (July 21st – October 23rd), the Seattle Art Museum (November 15th – January 22nd), and The Getty Center, Los Angeles (April 4th – July 9th).

GRAM Chief Curator Ron Platt, who has known both Bey and Weems for some time, proposed the exhibition. “Every once in a while, you get a good idea,” he said. He saw an opportunity to honor the long personal and professional relationship the artists had, while demonstrating the common social themes inherent to their work.

The resulting exhibition spans both careers, but isn’t entirely chronological. Instead, it’s divided into thematic groupings. The first, Early Work, finds a lot of similarity in their photographs (later, they would diverge); it’s followed by Broadening The Scope; Resurrecting Black Histories; Memorial and Requiem; and, finally, Revelations in the Landscape.

The exhibition has required not only the participation of the photographers, but hard work from everyone at GRAM. It will dominate multiple rooms. New walls have been put in. 140 photographs will be on display. A large visual timeline outside the exhibition will orient visitors, and a small collection of work by local photographers will speak to Bey and Weems’ influence.

An irony of curation: the better you do your work, the less people will notice it, because you’ll have removed as many obstacles as possible from between the viewer and the work.

“The most gifted artists become artists because that’s how they best communicate ideas,” Platt said. And Bey and Weems are certainly gifted artists. But aren’t we all? After all, the ubiquity of smartphones has made us all photographers. Most of us aren’t very good, though. Almost anyone can make dinner, but how many of us have Michelin stars?

But it’s the subject matter that elevates these photographs from excellent examples of craftsmanship to art, from snapshots that capture moments to portraits that reveal, stunningly, endless interior vistas: the landscape of the subjects’ souls.

As the political landscape has grown more polarized, it’s become more difficult to hear each other. Photography can bypass buzzwords and cant, creating a dialogue, or at least a connection, between subject and viewer, all without having to resort to words. Not all the photographs on display were intended to make political points, but the cumulative effect of such mastery trained on black bodies and black faces cannot help but be political.

Halfway through the run, a book will be published. It will be printed in Italy and distributed by DelMonico Books. At 180 pages, it will reproduce nearly every photograph from the exhibition. It will, I’m sure, be beautiful. I’m also sure that it won’t be a substitute for the exhibition, where you’ll be able to step up to the photographs and see in them someone as surprising as yourself.

Tweet
Published in Visual Arts
More in this category: « Warm Hearts The 49507 Project: 'Reclamation and Liberation' »
Login to post comments
back to top