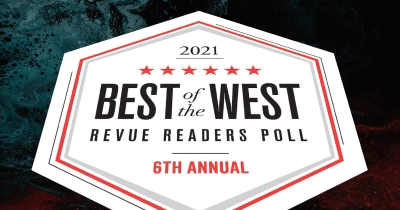 Last year, a certain pandemic stole the 5th Annual Best of the West’s thunder. Our goal nevertheless was to support struggling businesses and come together as a community to focus on the positives. Revue’s readers did exactly that, with tens of thousands of votes pouring in during a time when nearly every business was closed.

This year, we’re all in recovery mode. Restaurants, bars and even venues have opened back up, resulting in a mad rush of dining, drinking and events. Now, the issue isn’t so much “How do we keep the lights on?” as it is “How do we keep up?”

It’s a pretty good problem to have! Clearly, West Michigan truly cares about our local establishments, whether it’s because we love the food, the staff, or even what the business has done for community.

That’s what Best of the West is all about: Rewarding and acknowledging the local people and places that go above and beyond! So let’s take a closer look at the sixth year of our Revue reader poll.

OR, SKIP RIGHT TO THE WINNERS:

After a year of incredible change, we of course had to take a different approach to Best of the West this year. We moved the voting platform to our own site and made the entire thing nomination-only, meaning there was no autocomplete, no drop-down list, just a blank slate for each and every voter!

To be honest, we hoped this might help curb the tendency to vote purely on name recognition, as our goal is always to elevate the BEST of the West, not just the most well-known. In some cases it worked, but some reigns will never come to an end. And that’s OK!

In fact, we celebrated Milestone Awards last year, congratulating everyone who won their category all five years of Best of the West. This year, we’re introducing a new twist: The Golden Certificate.

We’ll be giving this out to the person or business with the most votes across ALL categories, and we’ll be announcing it on Facebook Live in early August. Keep an eye out if you want to know the true best of the best!

This year, we once again had tens of thousands of votes across 102 categories. Those categories are split across six groups, and while we never reveal the exact vote count, we have gathered the most popular winners in each group:

Congrats to these folks on not just winning, but knocking it out of the park.

It’s also interesting to see which regions attract the most votes, since this poll does cover all of West Michigan. This isn’t super scientific, but a majority of winners come from Uptown Grand Rapids, which covers most of the neighborhoods east of downtown. Speaking of which, downtown GR comes next, followed by the fervent fans of Rockford! Then we have the Forest Hills/Ada/Cascade area.

Maybe next year we can get the Kalamazoo and Lakeshore fans to step it up a notch!

Chef Jenna Arcidiacono and Amore Trattoria for delivering food to essential workers, leading the way with a safe pivot to takeout business, feeding staff meals, remaining positive, and Tip Back Tuesdays, delivering more than $30,000 back into the community.

Garage Bar & Grill for partnering with local companies to give away roughly 6,000 free meals early on in the pandemic, when it was most needed! That’s a lot of meals.

The Mitten Brewing for feeding kids during COVID school closures, helping create the MI Restaurant Promise with a commitment to being safe, “firing” customers who cause problems for staff and all-around good vibes.

Tuesday Trivia with Matt for hosting virtual trivia once a week for nearly the entire pandemic, bringing the community together, and donating money to nonprofits.

Congrats to our winners, thanks to our voters, and cheers to a comeback.

Tweet
Published in Best Bets
More in this category: « The Itinerary: July 28-Aug. 3 6th Annual Best of the West: Attractions »
Login to post comments
back to top