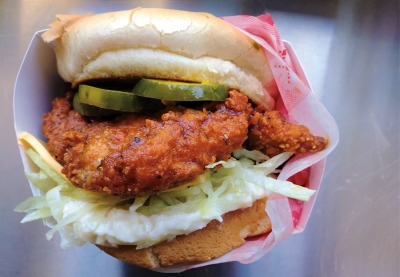 Popeye’s chicken sandwich was so powerful, the national chain was thrown into chaos for a solid week. Lines reached down the street, workers were pushed to the brink, and customers were starting actual, punches-thrown brawls over shortages.

Supplies that were supposed to last through September ran out before August was even over.

By the time you’re reading this, the sandwich may or may not be back in stock. But here’s the thing: Either way, you simply do not have to wait two hours in a drive-through line for good food. Love yourself.

While they may be overshadowed by the classically “American” burger, I’ve had unforgettable chicken sandwiches from restaurants all over West Michigan! As Popeye’s has proven, the humble chicken sando is a modern dining staple. Let go of that poor fast-food employee’s collar and take my hand — there’s a better way.

We have to start with Hancock, which pretty much immediately established itself as a champion in the chicken world. The new-ish restaurant’s appeal lies largely in its ability to focus on executing the basics excellently and without pretense. The hot chicken sandwich does just that, with deceptively simple toppings: iceberg lettuce, American cheese, bread & butter pickles, and mayonnaise. That means the real focus is on the chicken itself — tender, moist, perfectly sauced, expertly fried, loaded with that Nashville flavor. It harmonizes perfectly with those classic toppings, becoming more than the sum of its parts. If I had to offer up one quintessential chicken sandwich to teach aliens or future historians what the dish is all about, this would be it.

While we’re talking about new players on the scene, let’s head over to Friesian and try the Harissa Hot sandwich. While still in the same ballpark, this sandwich is clearly sitting in a different part of the stands than Hancock’s. The main difference comes from the harissa hot sauce, based on a North African hot chili pepper paste. Here, it’s almost less of a sauce and more of a light, zippy oil with a kick. It’s kind of refreshing in a way, especially paired with the housemade pickles, so the richness of the meal instead comes from the black pepper aioli and fluffy sesame bun. It’s unique in all the best ways.

Speaking of unique, Jolly Pumpkin takes the chicken sandwich to a place I never would’ve imagined. The confidently named “Perfect Chicken Sandwich” heads east with its flavors, featuring a sesame cilantro slaw, turmeric aioli, sriracha and spicy pickles all on a sriracha roll. The fried chicken itself is solid of course, but the flavor explosion comes from that slaw and aioli. I wasn’t even a fan of sesame before this sandwich, but the combination of the nutty oil, the herbal cilantro, and the rich, aromatic turmeric aioli? It all works perfectly. Together, it’s like street food taken to another level, and I want it more with every word I write.

In a way, with HopCat we’re going back to basics, except that the flavor here is anything but. The key to this Nashville hot chicken sandwich is the cut itself: spicy fried skin-on chicken thigh. With every bite, that dark meat flavor and texture is unmistakable — you can feel it coming apart in your mouth. I also greatly appreciate the addition of two toppings that you might not even notice are typically missing: tomato and onion. The bite of the onion and juice of the tomato play great with the classic lettuce, pickle and garlic aioli combo. Then again, the chicken has enough flavor, you could eat it entirely on its own.

In everything it does, the Southerner succeeds because it makes its own rules. Bun? No thanks, we’re going to use a biscuit, and you’re going to love it. Toppings? We’ll give you pickles, and they’ll be some of the best pickles you’ve ever had. The chicken is honey butter or Nashville hot — you decide. That’s pretty much it. What more do you need when the chicken alone sings with flavor, the biscuits are perfectly buttery and flaky, the pickles are like little rays of sunshine, and the breeze is blowing off the river through the screen window? Well, maybe a beer.

For having such a tiny menu and dining room, Nonla sure does go all out on its chicken sandwich. If you’re looking to satisfy that “fast-food” craving while actually respecting your body and taste buds, this is the place to do it. The Crispy Chicken Sando is simple, yet elevated, with perfectly fried chicken, pickled veggies and a spicy ranch sauce on a white bun. At that price, you might as well order two! Or order it “Nonla’s Way” to add American cheese, grilled onions, jalapeños, cucumbers and cilantro. Whoa.

Tweet
Published in Dining
More in this category: « Quite the Catch: Kingfisher Restaurant and Deli is a welcome addition to the neighborhood The Great Getaway: Max’s South Seas Hideaway is an immersive escapist experience »
Login to post comments
back to top