The Lumineers: Three Sides to Every Story 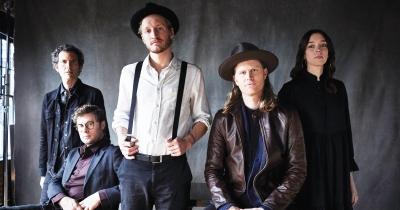 The Lumineers. Photos by Danny Clinch

Out of dusty cardboard boxes and old, forgotten notebooks came the first drafts for III, The Lumineers’ third album, released in September of 2019.

“I was thumbing through some old journals because I moved about a year ago,” said Wesley Schultz, frontman of The Lumineers. “I found this old lyric book and journal, kind of a mixture of lyrics and just thoughts I had. One of them was to write three EPs that form one LP, but they also stand alone.”

Though the band didn’t plan to turn their latest album into a storybook of EPs, Schultz’s idea eventually came to life when he and co-writer Jeremiah Fraites composed III, a 12-song record split into four parts.

The first three chapters on the album tell a story of alcohol addiction passing through a family over the span of three generations, beginning with grandmother Gloria Sparks, her son, Jimmy Sparks, and her grandson, Junior Sparks. The fourth EP features bonus tracks.

After launching their career with a self-titled, triple platinum album featuring the hit song “Ho Hey,” The Lumineers’ sophomore LP, Cleopatra, topped charts at Billboard and was nominated for two Grammys in 2013.

However, The Lumineers’ third album is quite different from its predecessors in its sound, feel and length. The record favors longer, more intense ballads over neat-and-tidy pop writing, with tracks reaching nearly seven minutes in length.

“An audience kind of has to be willing to go on the ride with you,” Schultz said.

But The Lumineers hoped that their listeners would be ready to pack their toothbrush and favorite blouse, and give these longer songs a listen.

“It felt really exciting because we had this faith that people had listened to enough of our songs that they might give it a chance,” Schultz said.

Fans of The Lumineers will notice that their album’s narratives aren’t completely unrelated, however. “Sleep on the Floor,” the debut track on their second album, and “Life in The City,” released on III,  “are sort of like cousins or sister songs.”

The two songs share a section of lyrics and melodies, and while “Life In The City” was released after “Sleep On The Floor,” it’s the original home of the repeating stanza found in both songs.

“If the sun don’t shine on me today/And if the subways flood and bridges break/Will you just lay down and dig your grave?/Or will you rail against your dying day?”

Even the song titles feed off of each other, not to mention their similar storyline.

“You make a pact to yourself to move to a big city, and then when you get there you kind of get crushed, and then chewed up, and spit out,” Schultz said. “It’s about trying to hold onto hope against that shock to your system of having all those expectations and dreams, and then thinking it’s going to happen like in the movies, and then it doesn’t.”

For many, the biggest difference between III and The Lumineers’ earlier releases is intensity, but Schultz was always writing story songs like these behind the curtains and before the fame. “We started out and made music that I think a lot of people would be surprised at the tone of.

“This was about 14 or 15 years ago, and no one was really paying attention. That was a gift because then you could experiment a lot and kind of figure out what you like to play, and no one’s judging it or saying anything about it.”

Through a commission to write for a film by M. Night Shyamalan and inspiration from songs like Jack White’s “Carolina Drama,” Schultz recently picked up story songs he’d shelved years ago. This resulted in the tracks “Salt And The Sea,” “Jimmy Sparks,” and enough of a storyline to turn III into a short film.

The 44-minute short film, directed by Kevin Phillips, is composed of music videos that can be watched separately or in the order of the album. It creates a visual mosaic for the record’s complex themes of love, fear and generational addiction, using only the music for dialogue.

“Our goal was pretty modest. It was to try and make something that resembled a film, but we actually ended up making a film,” Schultz. “I still can’t believe it worked out.”

There’s no doubt that III centers around a tough topic. Listeners and critics alike wonder why The Lumineers chose to create a large project around a struggle like addiction, but Schultz wants to move past talking about the topic like it’s taboo, “in the same way that you can have a tattoo and still get a job.”

“This particular subject can be upsetting to people, but I don’t think that makes it not worth singing about,” Schultz added. “I was just proud of us for making the record we wanted to make in the time we wanted to make it, and not trying to make a decision around fear but around wanting to express and explore this.”

While some songs in III may be difficult to swallow and its film is a blood-chilling accompaniment, addiction is not just a story on a record. It’s a reality for Schultz and Fraites, as they both had relatives who struggled with it.

Some of the anecdotes behind III and the rest of The Lumineers’ albums are shared in their live performances, as Schultz tells real-life stories about their songs like he’s on the couch next to you instead of on an arena stage.

“When we play, we try to win the audience over genuinely by our own merit, and not by a parlor trick or something. You want to just keep hitting them with good songs and putting your heart into it.”

“We didn’t set out to make an album that was a big story arc. It more emerged out of what we already created,” Schultz said.

“It was a happy accident.”

Tweet
Published in On Tour
More in this category: « You Just Have to Get Out and Do It Whitney: Turning It All Around »
Login to post comments
back to top