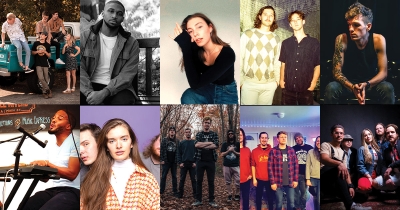 Live music has slowly, steadily returned to West Michigan over the past year. With new and different opportunities starting every day as the pandemic continues to move into the past (hopefully), the many talented bands and musicians in our area have a variety of ways of getting seen and heard, live and in person.

From more all-ages afternoon matinee shows welcoming in a younger audience, to Opnr – run by legendary Grand Rapids DJ Andrea SuperDre Wallace – helping local acts land more opening slots on touring bills, the scene has come back stronger than ever. So to help kick the year off right, we’ve compiled a quick list of some of the artists you need to know about now.

Prior Noon
Hometown: Lowell
Genre: Pop-country, Roots-rock
Recommended If You Like: Lady A, The Band Perry

Hailing from a small town, but with Nashville experience already under their belt, this rising young country group has gotten a lot of attention in just the past couple years. Racking up over 40,000 streams of their first four songs, the six-piece plans to release their first EP early this year with two additional songs. And make sure to catch them live, as they’ve already shared the stage with the likes of local favorites Gunnar & the Grizzly Boys and Wayland, with more big shows sure to be on the way.

As the founder and leader of 616 Records, Teyland Avery hopes to channel his heart and his passion into a new era of unity for the local hip-hop scene. Grand Rapids born and raised, Teyland wants to tell stories that connect, making an impact on the community with both his words as a rapper, and his actions as an entrepreneur. He’s already dropped two mixtapes under his full name, a full-length album as just Teyland, and appears on the excellent 616 Records compilation, so don’t expect him to slow down now.

With over 500,000 streams of her single “Lavender Hue” on Spotify, local singer-songwriter Emma Bieniewicz has brought a new shade and color to the local music scene with her own original sound. Following up with her fascinating 2021 full-length album, her songcraft only continues to grow as she’s begun her latest endeavor: a deconstructed project in the form of a series of singles that she kicked off with her latest track, “Idle,” in December. Proving that she’s anything but idle, expect to hear a lot more from Emma in the coming year.

Made up of brothers Kendall and Connor Wright, this duo has broken through online with placements on prominent playlists, including Spotify, Apple Music, and regular rotation on SiriusXMU, following the release of their catchy debut EP “Cellular” in 2021. They’ve expanded their jangly, guitar-driven synth-pop sound with their upcoming new EP, “On the Dance Floor” (due out early this year), and plan to groove away our collective anxieties on tour this March, including a return stop to the Treefort Music Fest in Boise, Idaho.

One of the most explosive DJs and producers in West Michigan’s bass music scene, RØNAN capped off 2022 with the release of his debut album, “False Dichotomy.” Featuring collaborations with Chaotic Character, Grisly, Icky, and Lowke (who he will go B2B with when opening for Artix! at The Intersection on Jan. 13), “False Dichotomy” brings together all that’s been building for RØNAN across his solo work, and as founder and CEO of Anbu Agency, which has helped organize immersive multimedia/multisensory experiences across the state and online.

If 2022 gave the immensely talented vocalist/multi-instrumentalist Dylan Tolbert a chance to get out and play, 2023 should prove the year to put his name firmly on the musical map. Gigging constantly in support of his debut album, “Tolbert Drive,” which he released in 2021, he made his voice heard at this year’s Sounds of the Zoo festival, and at bars and restaurants all across the region. A true talent, his classic sound with a soulful groove works in so many settings and sets him apart, he should work his way onto even bigger stages.

There’s no defining or really even describing Spike The Media, and it’s clear they like it that way. Imagine a Gen Z post-TikTok take on Primus, with a healthy mix of guitar shredding, and varied vocals split between guitarist Brendan Martin and bassist Lauren Martin, and you’ll still be in for some surprises. The band released their unpredictably diverse debut album, “Giant Space Ocean,” last summer, so look for them to get out and play more in the coming year.

Self-described “weird heavy” band Mouthful of Locusts clearly uses those descriptors as magnetic poles around which to assemble its sound. Calling the result chaotic metal, the chaos feels well-controlled as the band displays a deft mastery of its craft, even as it readily rides nearly off the rails with songs titled things like “Assisted Living Dracula.” Hitting the studio to record their forthcoming full-length, and opening a huge show for Michigan deathcore destroyers See You Next Tuesday at The Pyramid Scheme on Jan. 14, Mouthful of Locusts aim to break 2023 wide open.

Although they might be missing in action during the early months of 2023, Missing Days will actually be hard at work finishing their first full-length album. If their single, “Firework,” is any indication of what to expect from the evocative five-piece and their effusive guitar-work, the record could be quite spectacular. A part of the strong scene growing around the Park Theatre in their hometown of Holland – where they last played back in December as part of its annual fundraiser – Missing Days are a band not to be missed.

A bluesy blend of infectious melodies, driven by three-part harmonies and an impeccable pop sensibility, Stella Blu has all the chops to become a major mainstay in the local music scene. Already topping bills around town, the five-piece finds a way to make people move with their funky grooves that should prove perfect once festival season returns this summer.

Tweet
Published in Local Music
More in this category: « Top 5 Local Albums of 2022
Login to post comments
back to top